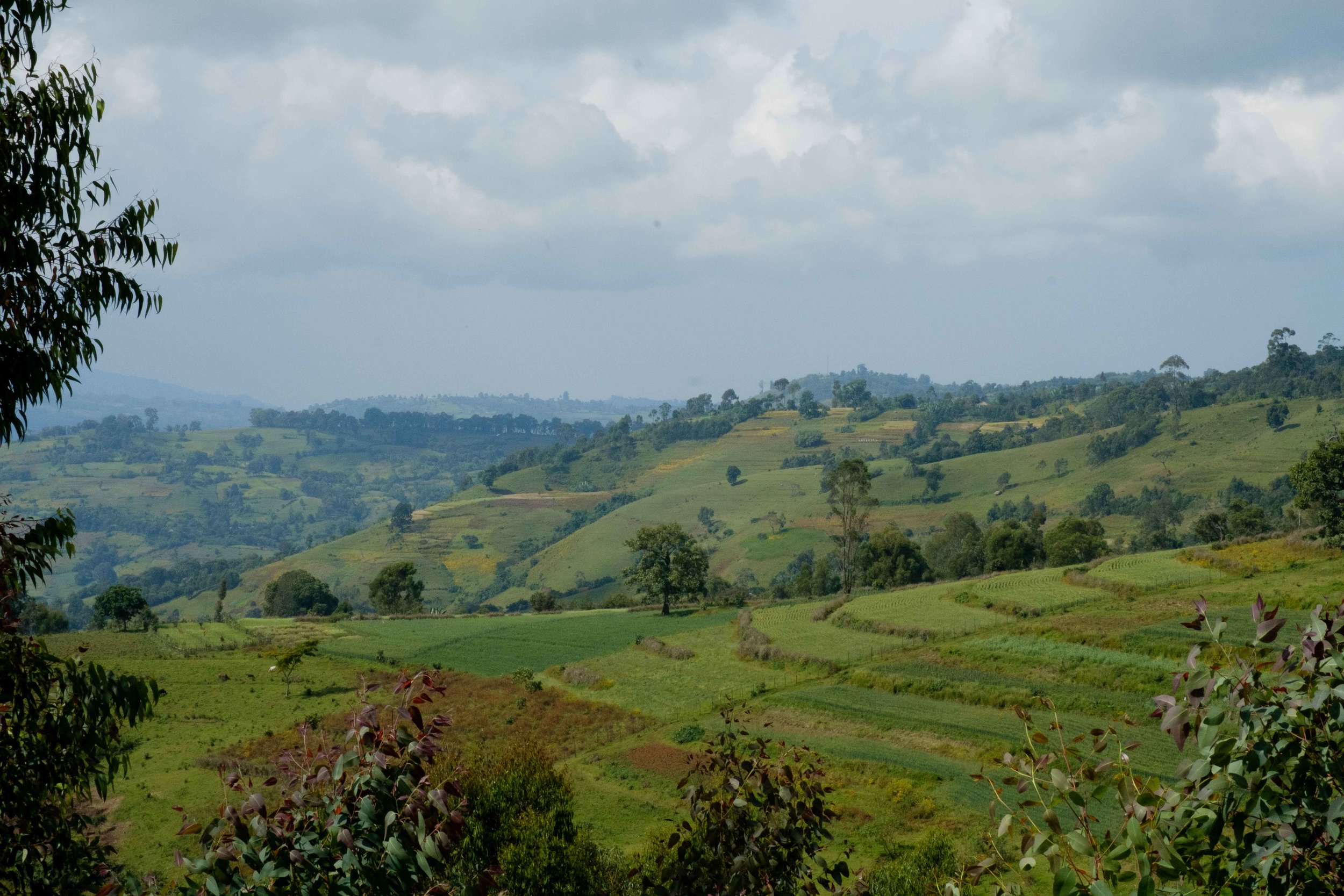 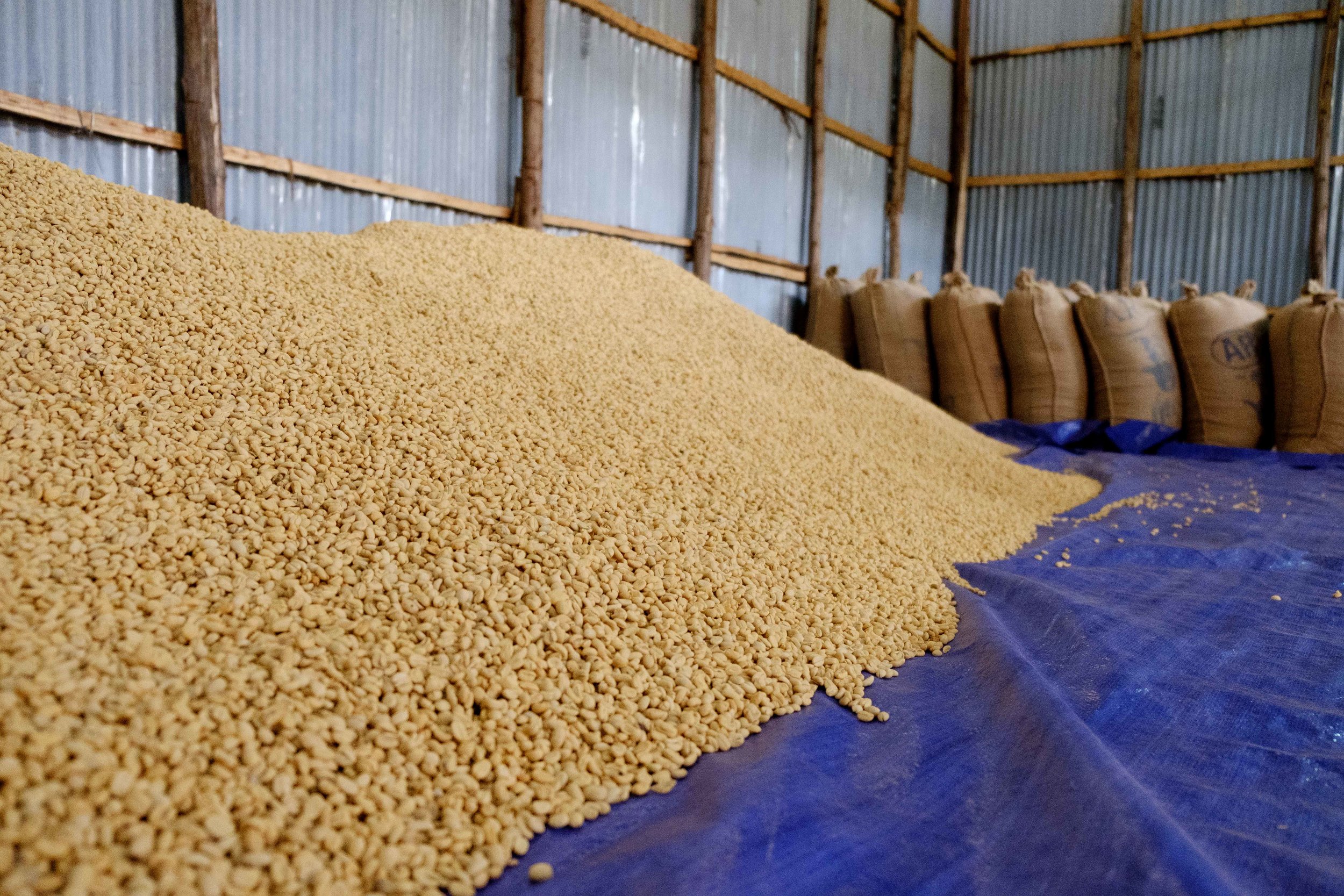 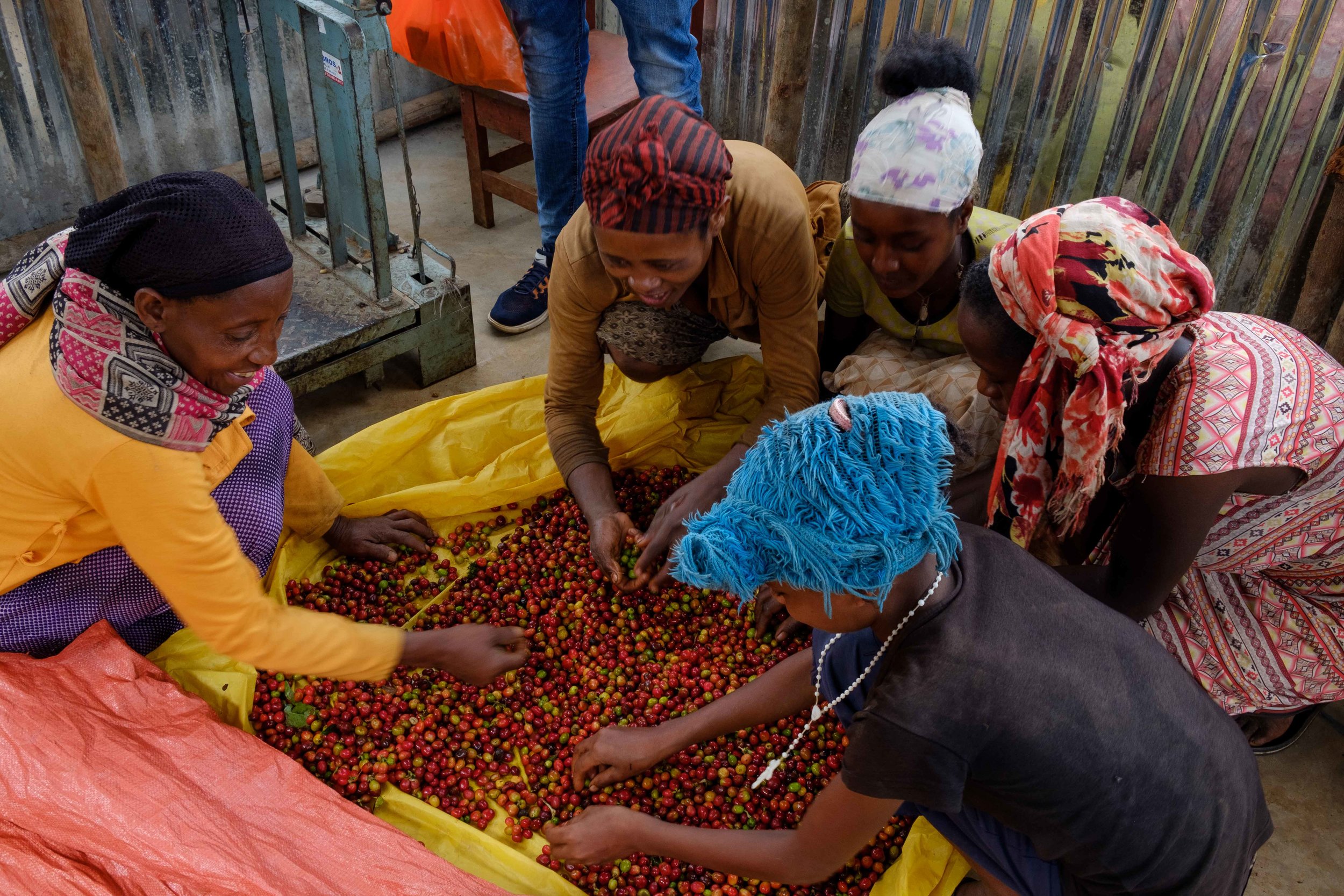 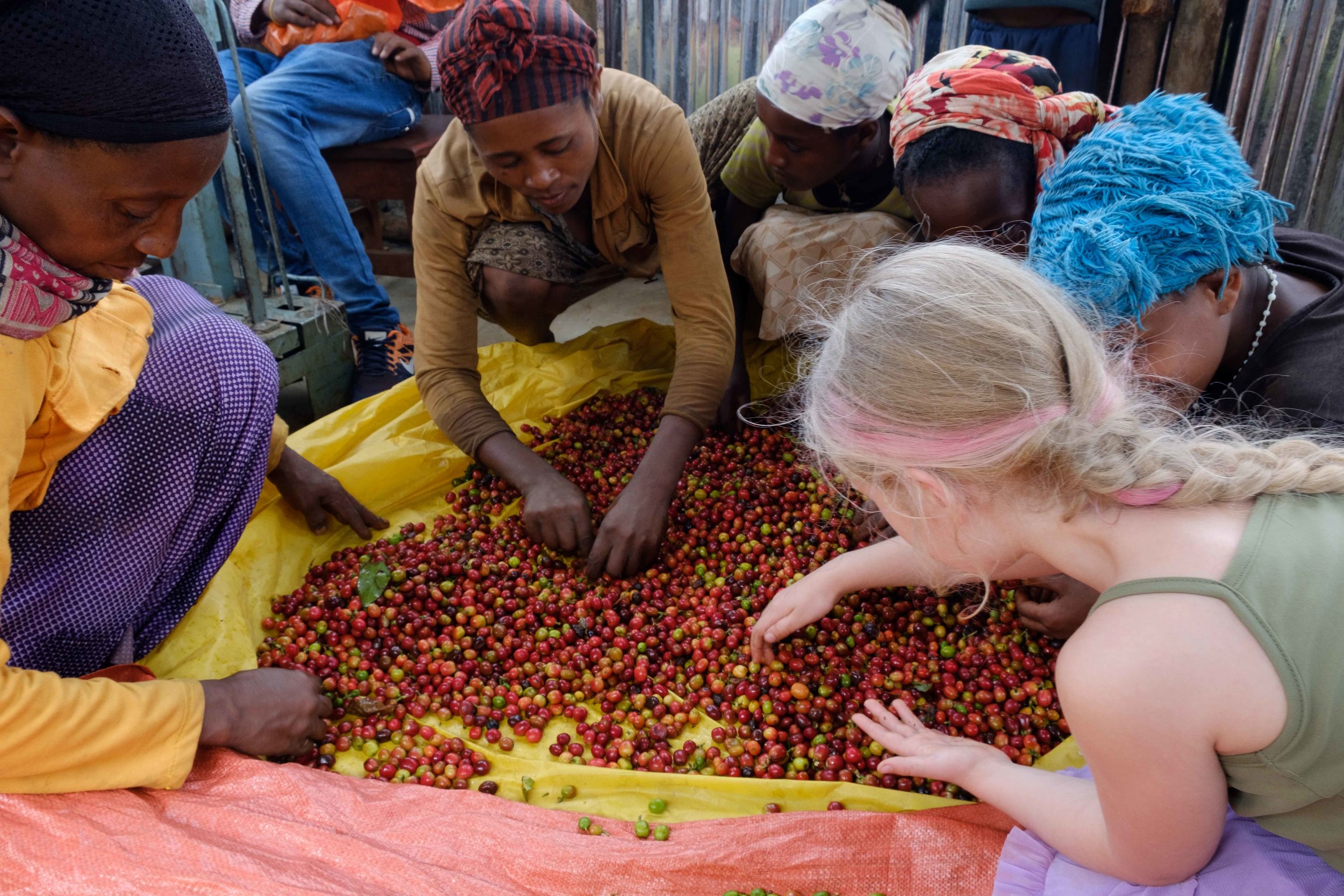 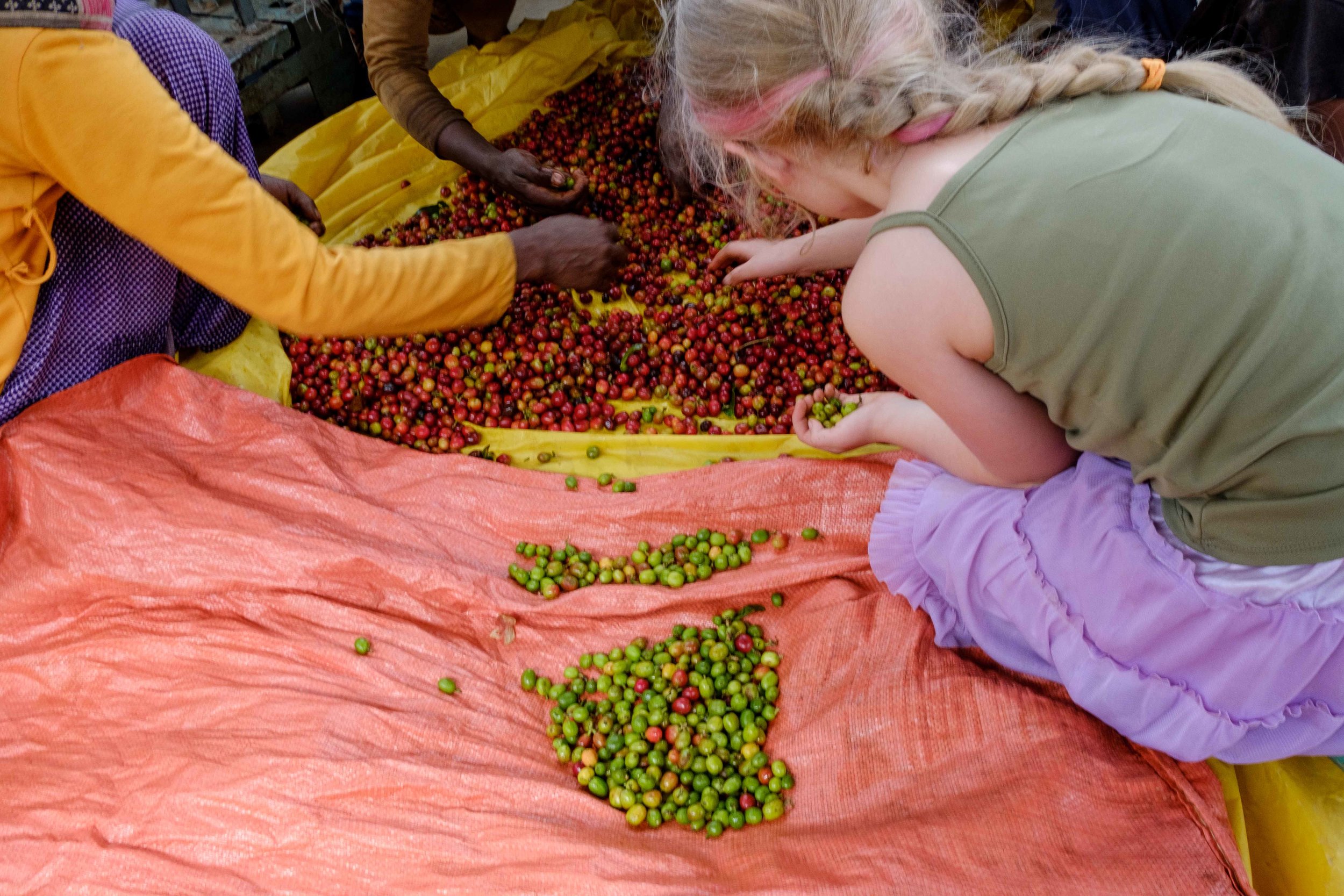 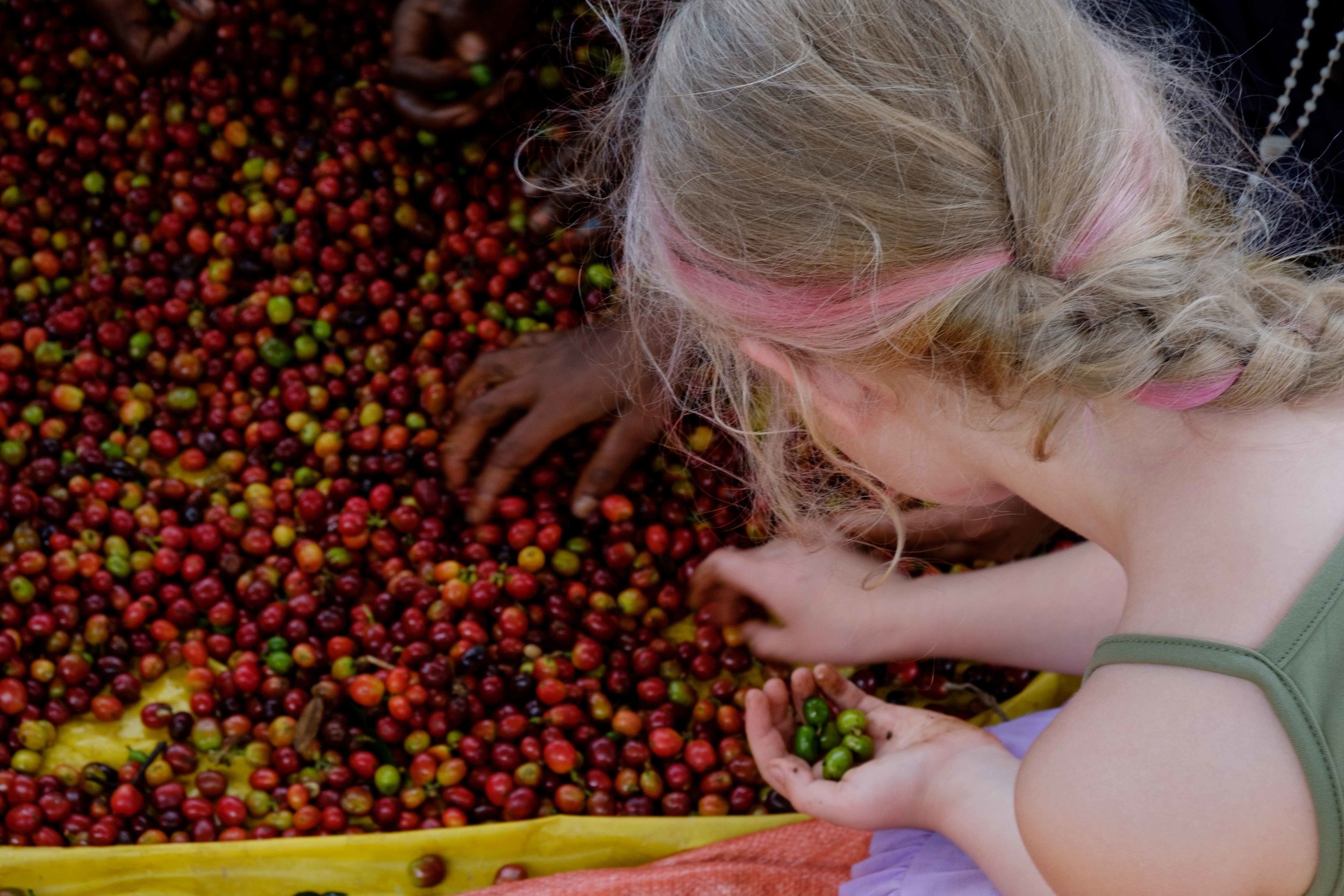 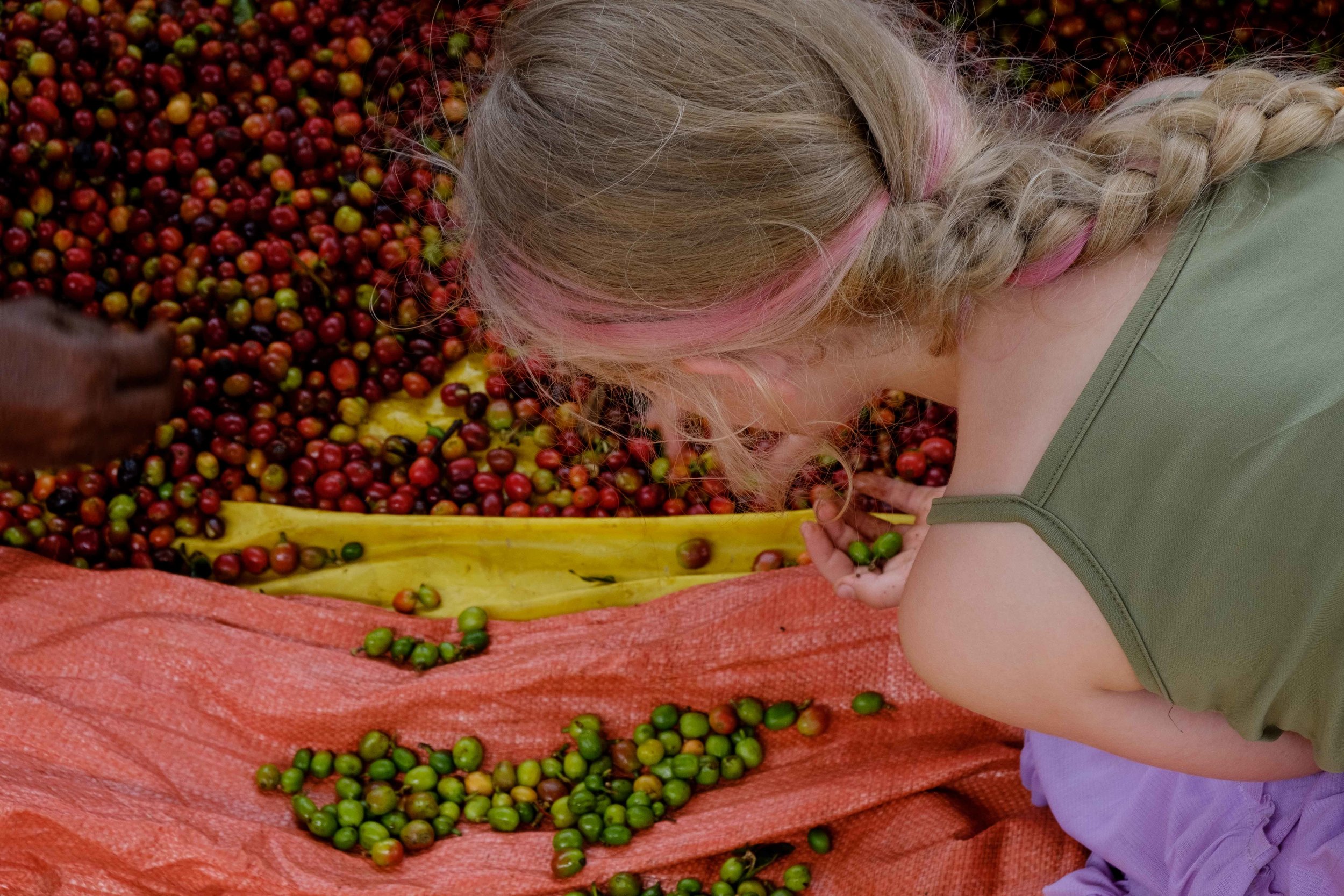 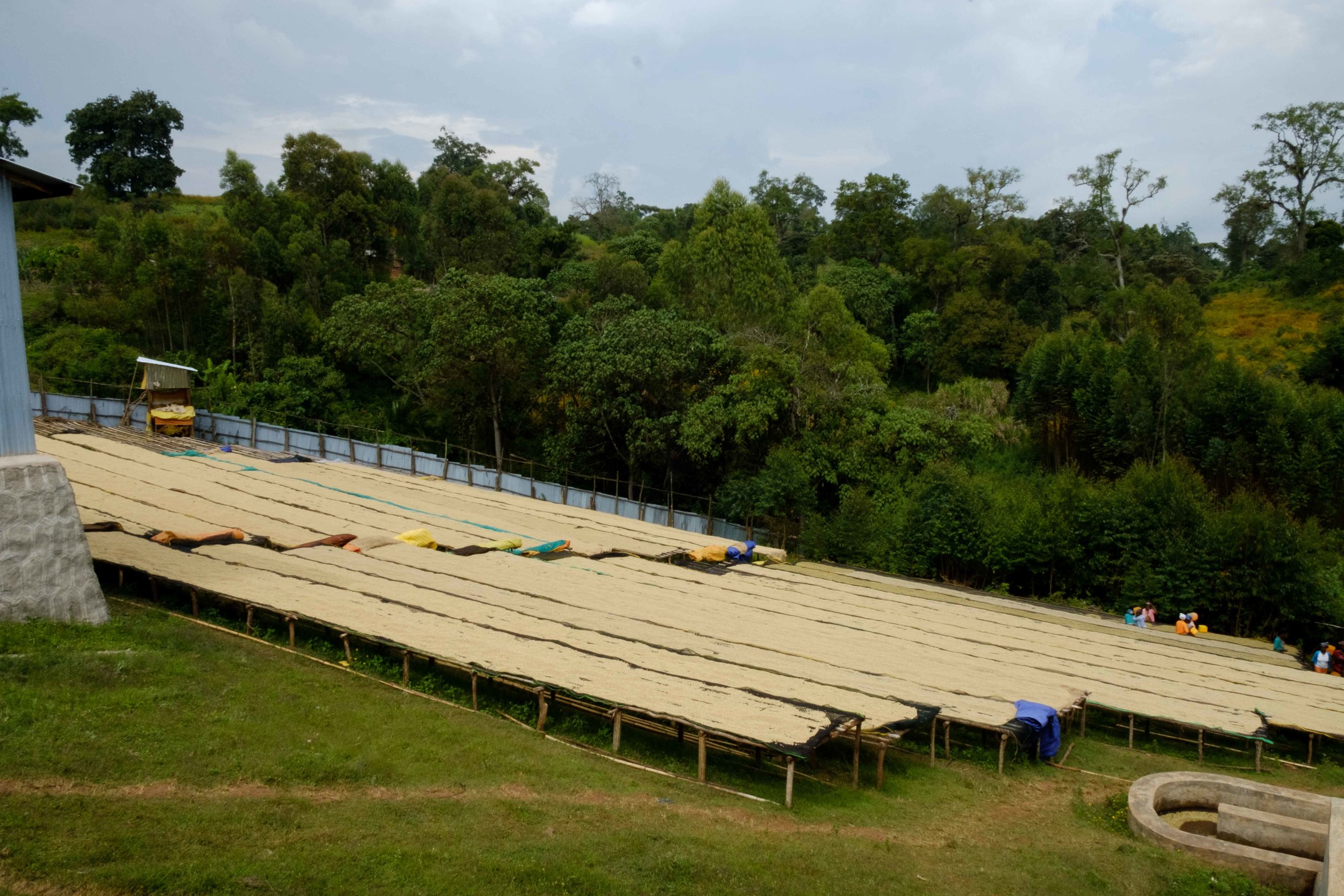 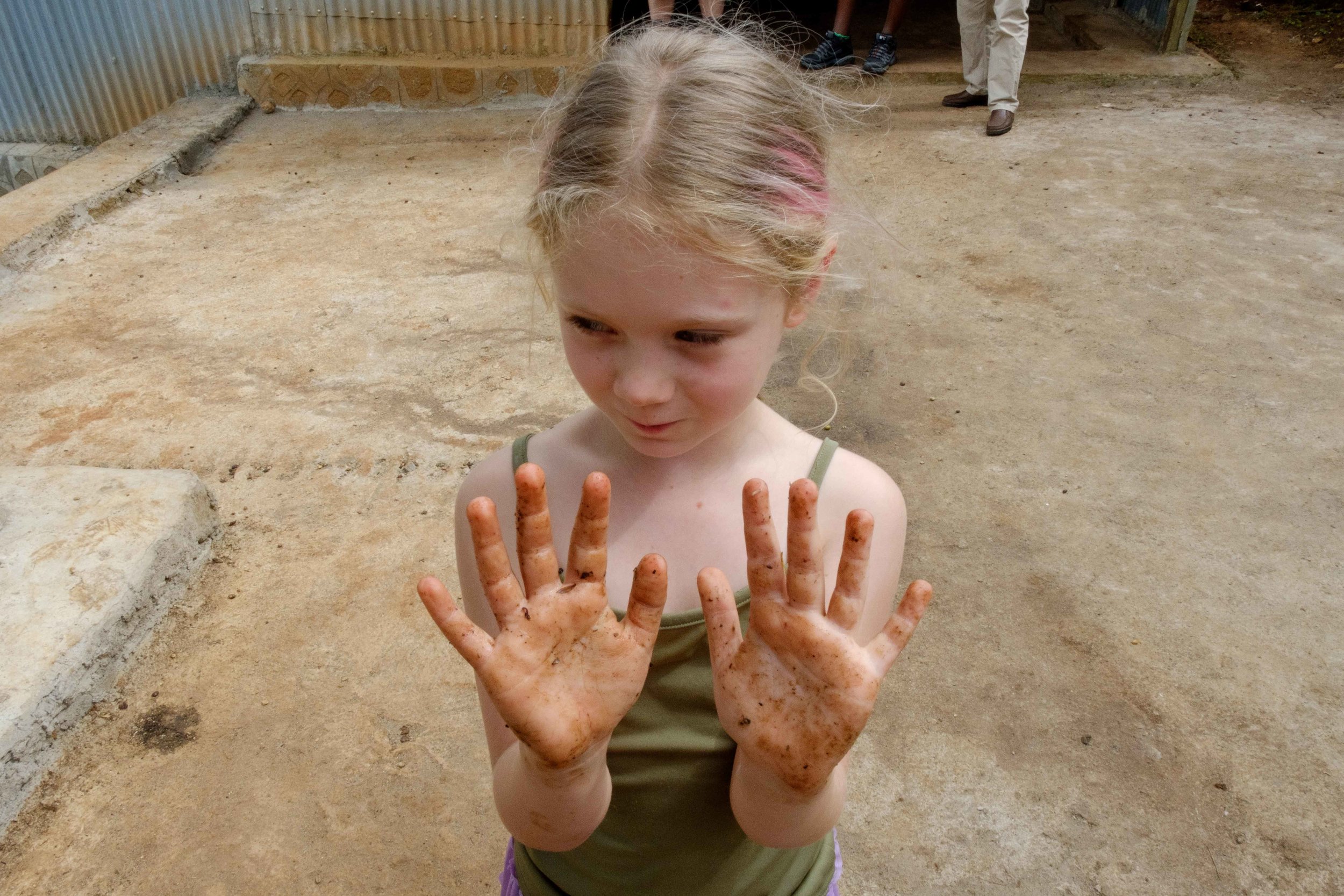 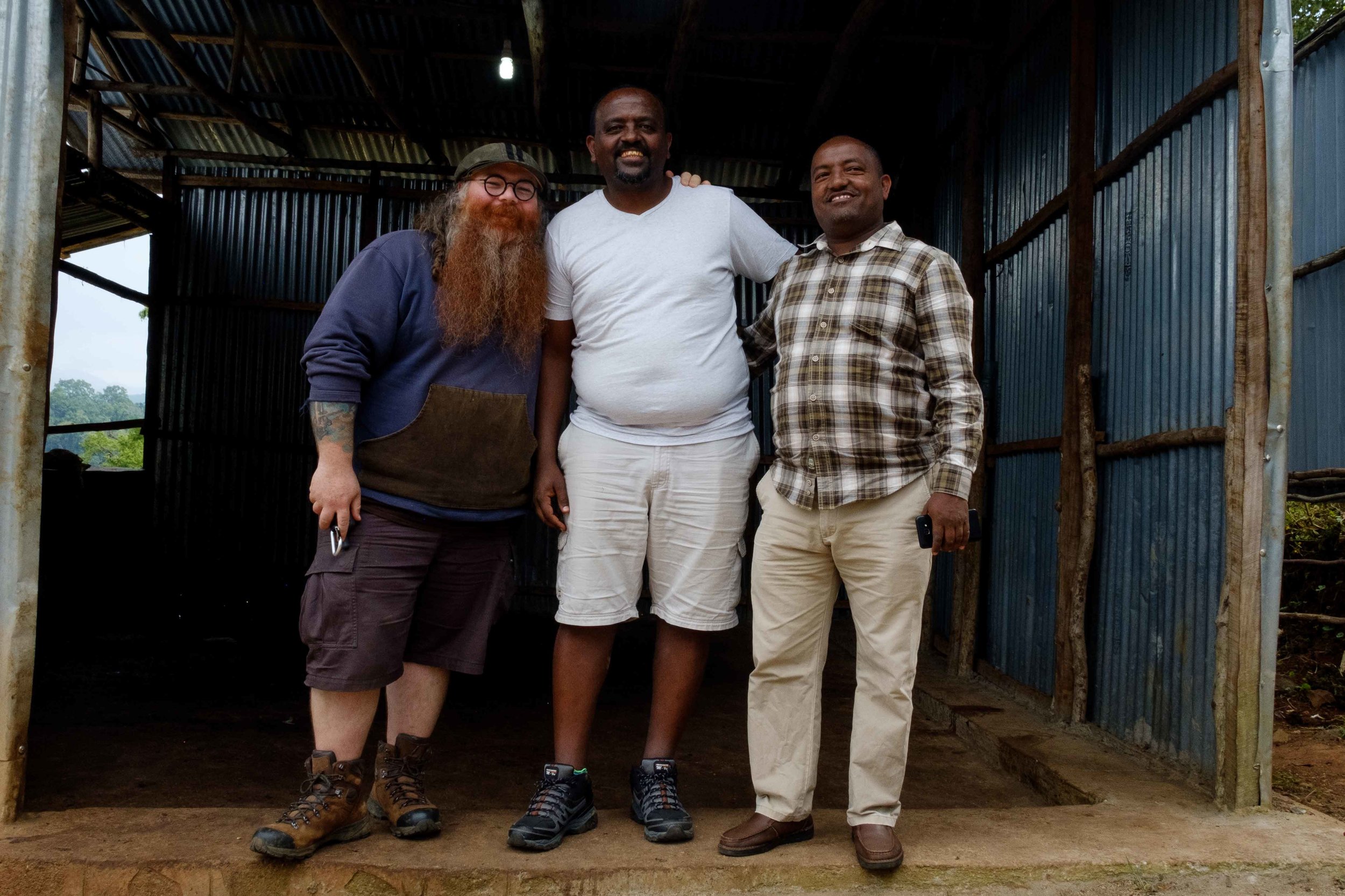 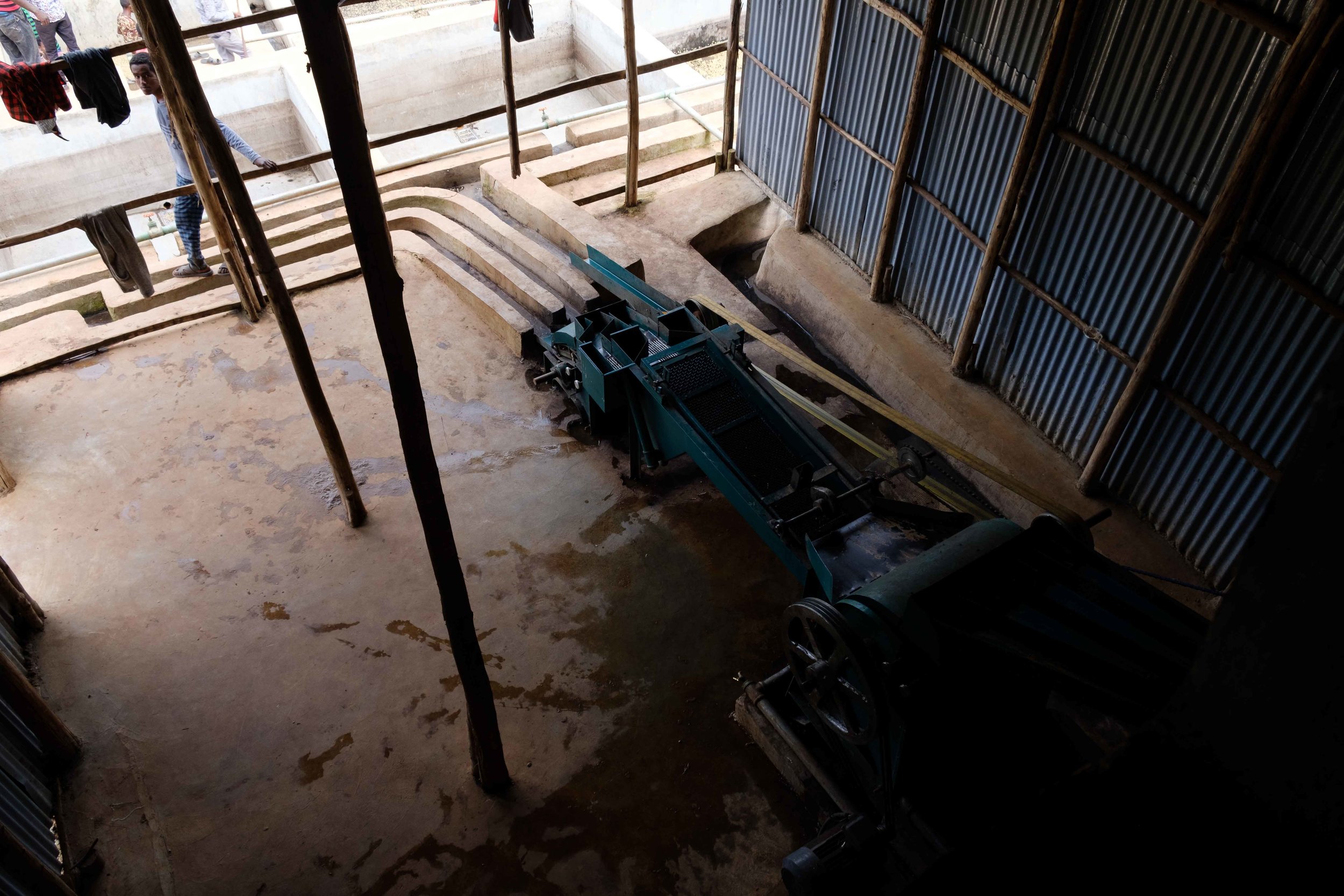 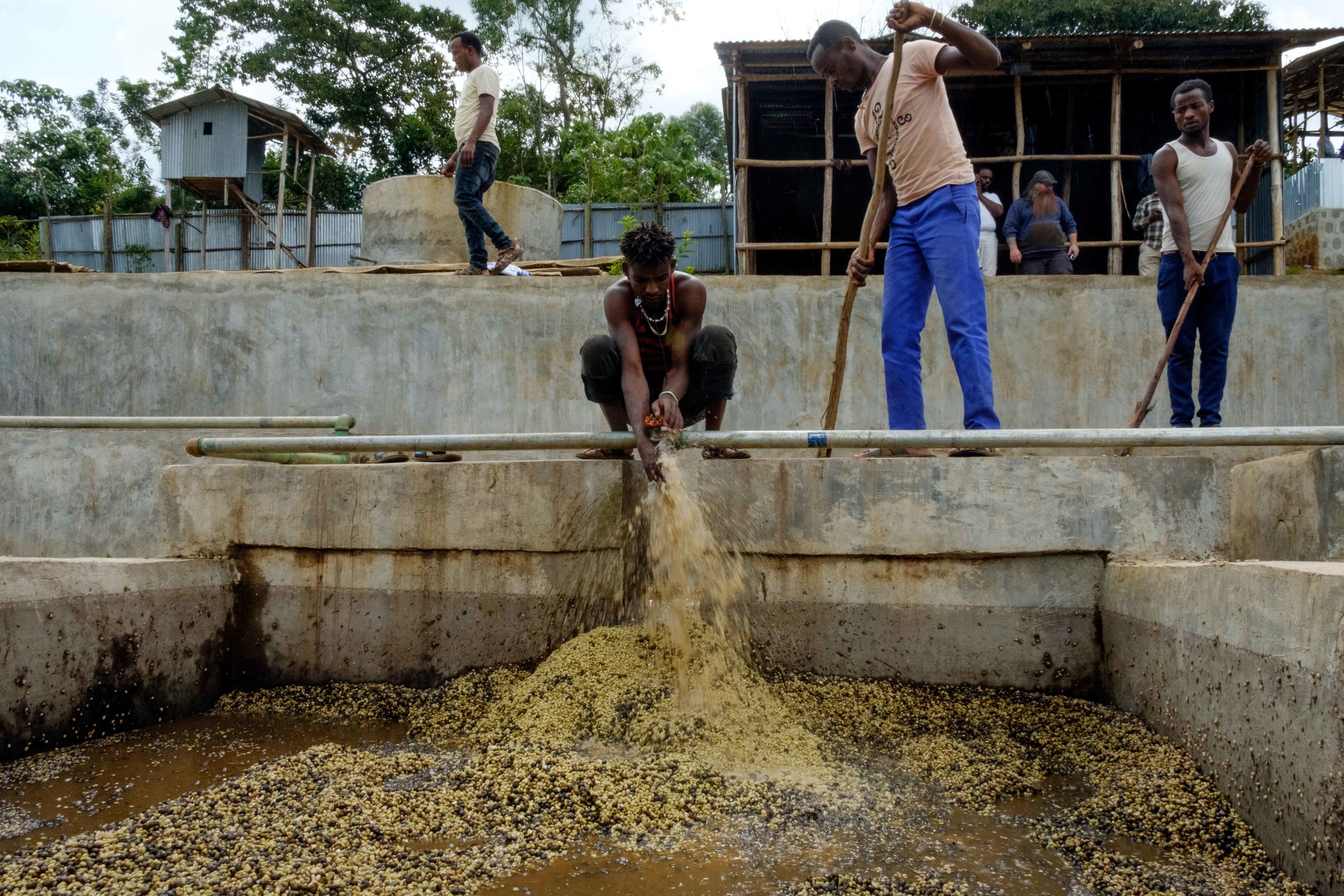 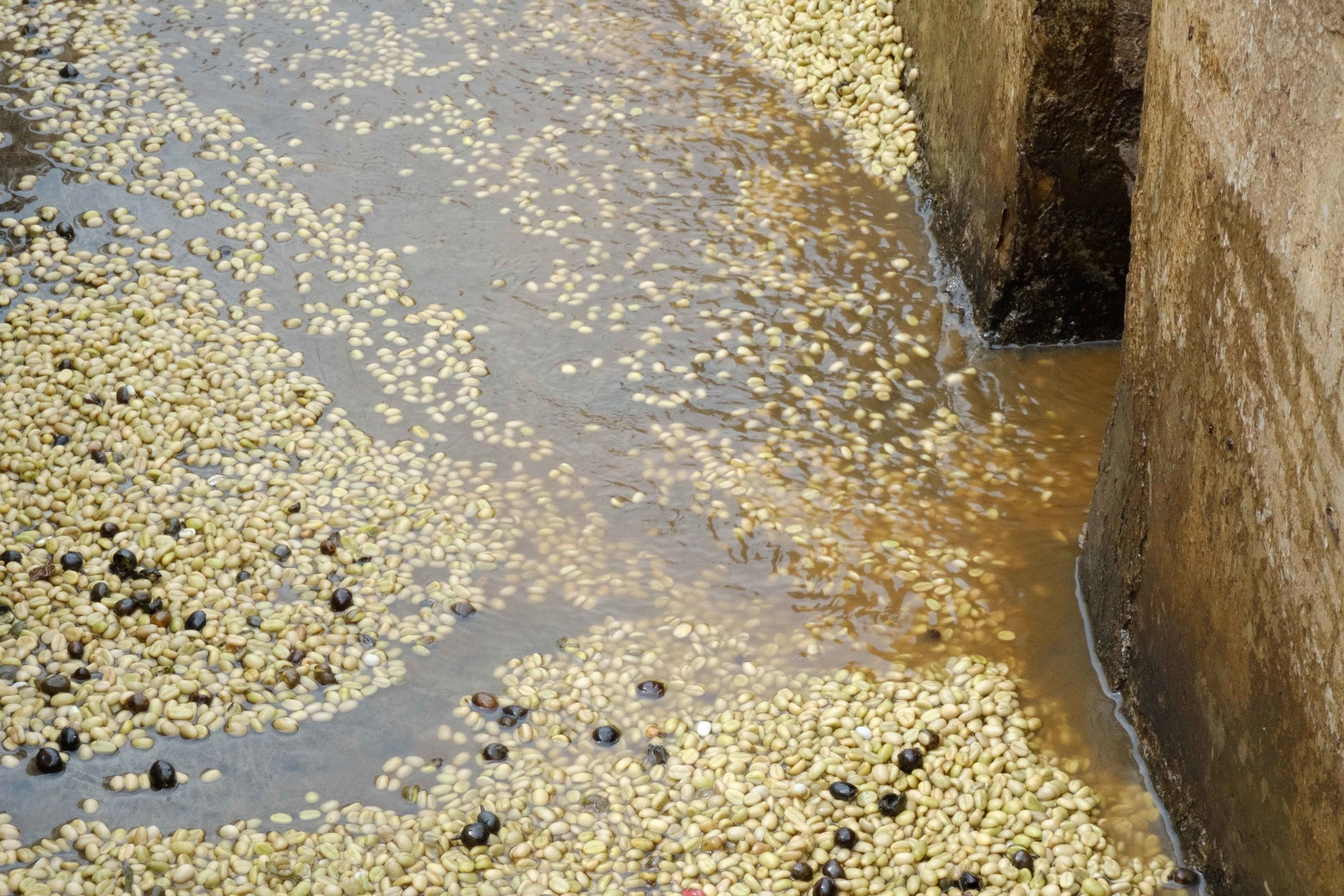 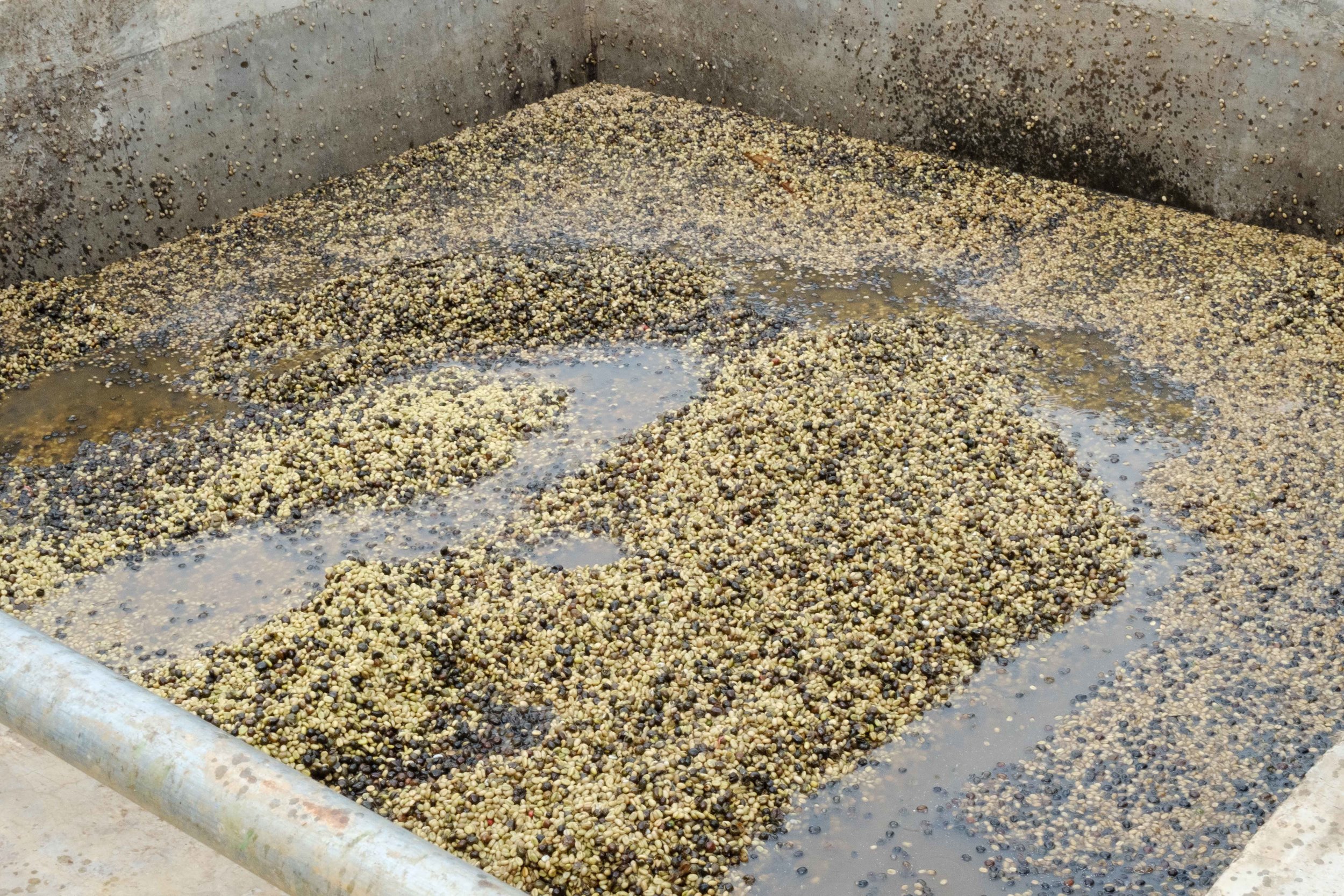 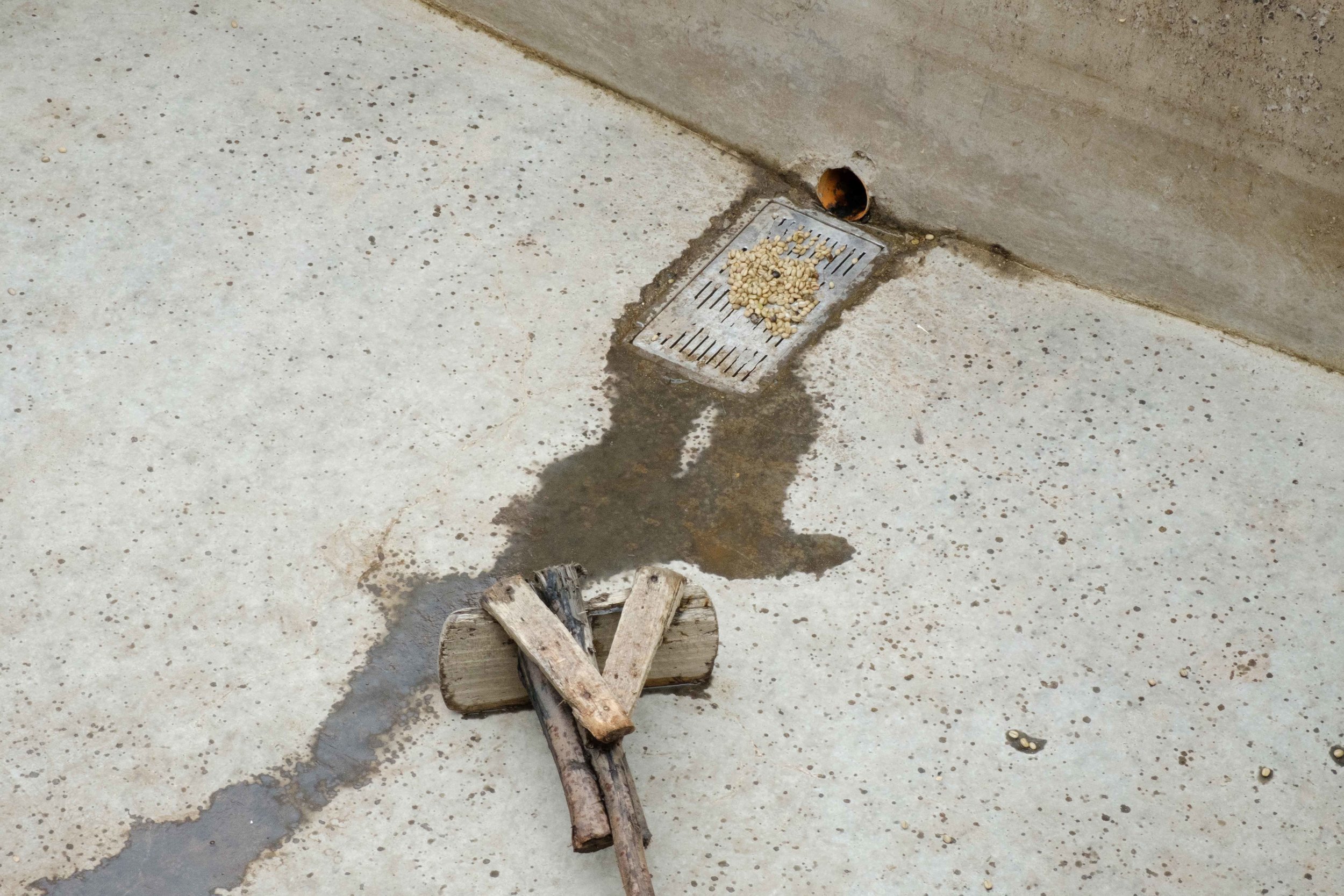 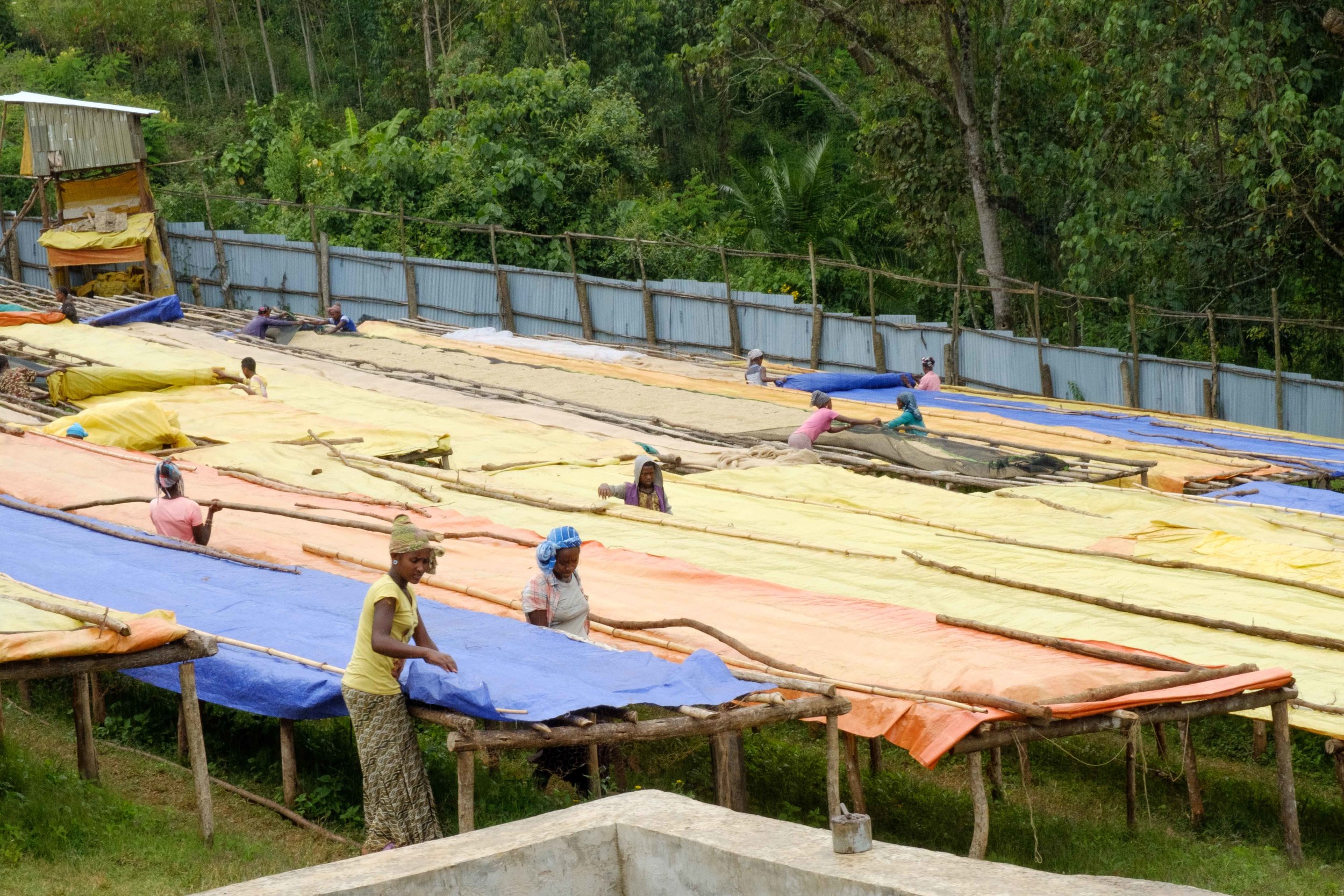 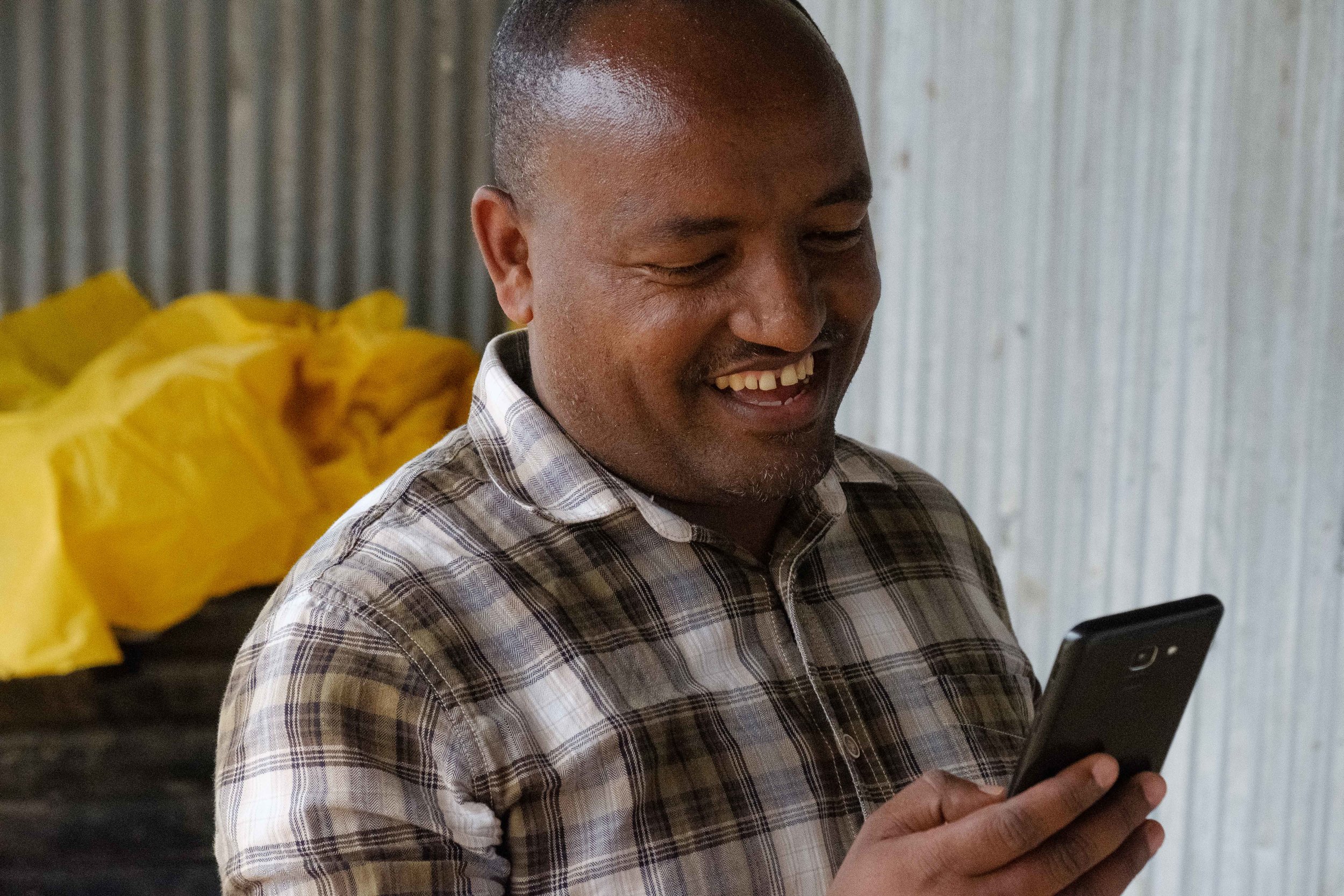 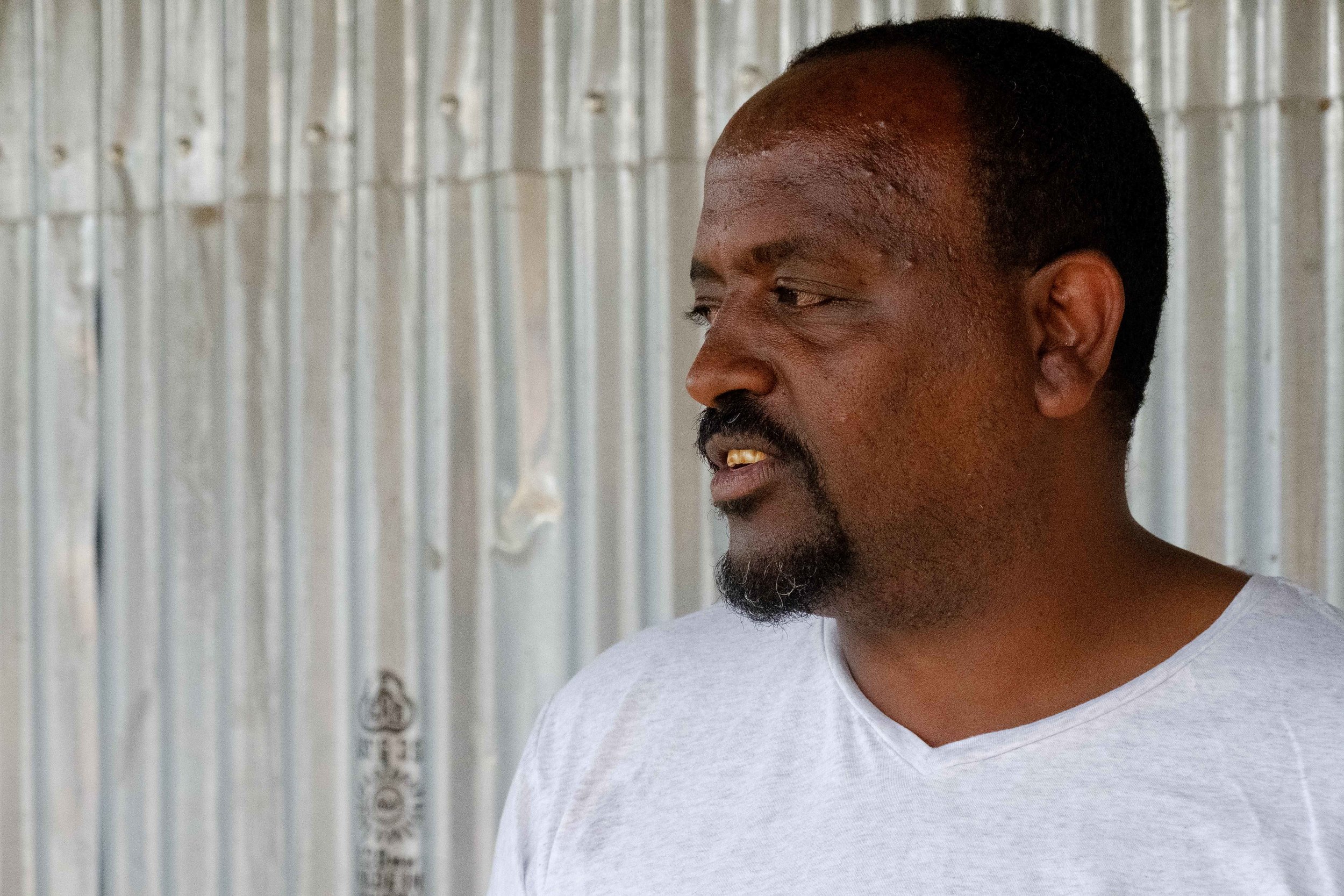 (The motto which hangs on the entrance to Dinkalem’s dry mill, across the road from the Wush Wush washing station)

Dinkalem’s washing station is one of the most cheerful we get to visit each year, with smiling faces all around, clean facilities, and a well-organized production flow. Dinkalem himself is a short, cheerful man who’s proud of all he’s accomplished in partnership with his wife, Sofia, for the area. Together they are a kind of power couple: she organizes charitable work such as educational sessions for children and food distribution to disenfranchised Keffa people, and he runs the coffee business in two locations (one in Wush Wush and one in Dinbira for washed and natural processed).

They live in the town of Wush Wush in a rambling house that seems mostly hallways and surprising corners. Sofia is known for her kirkele, or lamb stew, which is the best we’ve ever tasted—it’s all savory chunks of stewed lamb so tender it drips off the spoon, gleaming fatty, buttery broth, and surprising layers of flavor that just keep revealing themselves on the tongue. They have 6 children, who love to play vigorous hide-and-seek with our daughter.

Dinkalem is proud to produce mostly very high-end coffee. His washing station in Wush Wush is 6 years old this season and sits on two hectares, with long drying beds stretching to the far reaches of the property, which is bordered by the glorious forests so characteristic of Kaffa. Approximately 2500 smallholder farmers bring their cherries to the washing station, where coffees are accepted or rejected based on quality and then sorted by hand before pulping.

Dinkalem has a four-disk Agard pulper with two repasser disks, which receives regular  maintenance. At its highest capacity, it can process approximately 4000 kgs per hour. The nearby Agama River provides water for washing through the serpentine channels at Dinkalem’s washing station; after coffees have been pulped, fermented, and washed, they are placed on the drying beds to reach optimal moisture content. Normally at this site, coffees are fermented for 36 to 48 hours depending on cloud cover and weather patterns, with the water being refreshed every 12 to 15 hours during the fermentation cycle. Following this, the parchment is scrubbed in washing tanks and soaked for another 12 to 24 hours. However, in the past couple seasons, we have been working with Dinkalem to implement the use of a Mechanical Washer, also known as a Demucilager. This dramatically reduces the use and waste of water, as the parchment does not need to undergo such a long fermentation cycle. This particular lot was fermented in fresh water for 12 hours following pulping. Then, it was mechanically washed with the demucilager, effectively removing the mucilage and eliminating the need for further fermenting and scrubbing in the washing tanks. Using the demucilager also allows for better controlling the amount of mucilage that is removed. Following the soaking cycle, the parchment is taken to the raised drying beds.

The drying beds are composed of plastic and wire mesh on local tree materials, and parchment is typically dried at a depth of approximately 2 cm. The workers at the washing station carefully stir, hand-pick defects, and cover the parchment multiple times a day depending on sun or rain. Once they’ve reached optimal moisture content, the parchment is moved to the storage shed which is clean and made from sheet metal as is customary in the area. Dinkalem religiously prohibits shoes, perfume, and any food or beverages in the storage shed.

Once he’s ready to transport the coffee, Dinkalem loads it in trucks and take sit to the warehouse in nearby Bonga, where it is analyzed by officials and registered with a grade. At that point it is then trucked to Addis Ababa.

Every part of Ethiopia has its own mystique, and the Western region of Keffa is no exception. The roads that thread the map are sparse and constantly traveled, giving up the rich scent of the red soil they are built from under the tires of Land Rovers and donkey carts. Rolling away from the roads like theater curtains are the fertile patchwork hills that disappear into a soft misty sky. Puffy trees emerge against the skyline like cotton balls dyed the deepest spring green.

A middle-aged woman with a quiet face stands with one hip cocked, wrapped in her shawl of royal purple while a toddler plays in the dirt at her feet. Her eyes watch us pass. Behind her is a half-finished hut showing its caramel-colored skeleton of hand-hewn logs maybe five feet long, closely placed on their ends with a mud and straw daubing covering them. On the tall central pole is placed a yellow plastic jug, upended against the rain.

The people of Keffa carry their pride in coffee close to the bone. We've all heard the stories: Kaldi, a bored goatherder c. 850, notices his goats have extra energy after eating the fruit of a nearby bush, tries some for himself, and thus the coffee ritual is born. Whether that's really how coffee was discovered or not, we do know the legend originates from Kaffa, and the very name of our beloved beverage derives from the region in the southwestern highlands of Ethiopia.

Until it was annexed to Ethiopia in 1897, the Kingdom of Kaffa thrived on a rich trade in ivory, gold, and civet oil. Coffee has been grown in the region for time immemorable, clustering in the lush forests along with forest cardamom, long green peppers, and banana trees. Honey is a large part of Keffa's culture and export, with wooden honey hives called "gendo" hung in the trees and massive consumption of Ethiopian honey wine, "tej". Tea is another famous product, particularly near the lauded Wush Wush village (where this coffee also originates).

The Ethiopian government is establishing a National Coffee Museum in the central Keffa city of Bonga, to celebrate the discovery of coffee in the area. Traditionally in Kaffa, coffee is both consumed in the buna ceremony and rolled with ghee, or clarified butter, for a high-energy snack, similar to the centuries-old tradition.

During our recent (November 2018) visit to this Dinkalem’s washing station and home, we were trapped in a small hotel in Kaffa’s administrative center, Bonga, for four days while the Keffa people protested recent social media postings that designated nearby Jimma as the birthplace of coffee. You can read all about that in Emily’s detailed article for Daily Coffee News.

**Washing with the Demucilager dramatically reduces the amount of water used for processing (typically 3 refreshed batches of 8,000 to 10,000 kgs of water for fermenting a single tank of parchment).

Demographics
Local people group name: Keffa
Local language(s): Keficho, or Kefinya
Local name for area: Agama, named for the Agama River which is the water source for the washing station