Reaching Getinet Ambelo’s coffee farm requires fording a busy stream after winding through increasingly rough roads for kilometer after kilometer. Once you’ve inched over the stones and pulled onto solid ground, the road narrows and leads into the farm, past the living quarters for farm workers and into the 144 acres or so that are planted with coffee. Coffee is intercropped with a number of different types of trees, including (in local names) Birbira, Sholla, Ketto, and Yudo. This intercropping lends a multi-dimensional feel to the farm, with layer upon layer of greenery building from forest floor to understory to canopy.

Along with his coffee, most trees of which are three to five years old, Getinet also grows a variety of spices on his farm, which is characteristic of the Sheka Zone. His farm is around 200 hectares in total and is run by an experienced manager. Daily harvests are grouped from the 150 or so pickers, hand sorted, and then transported to his washing station, where they are processed and eventually mixed in the storehouse. 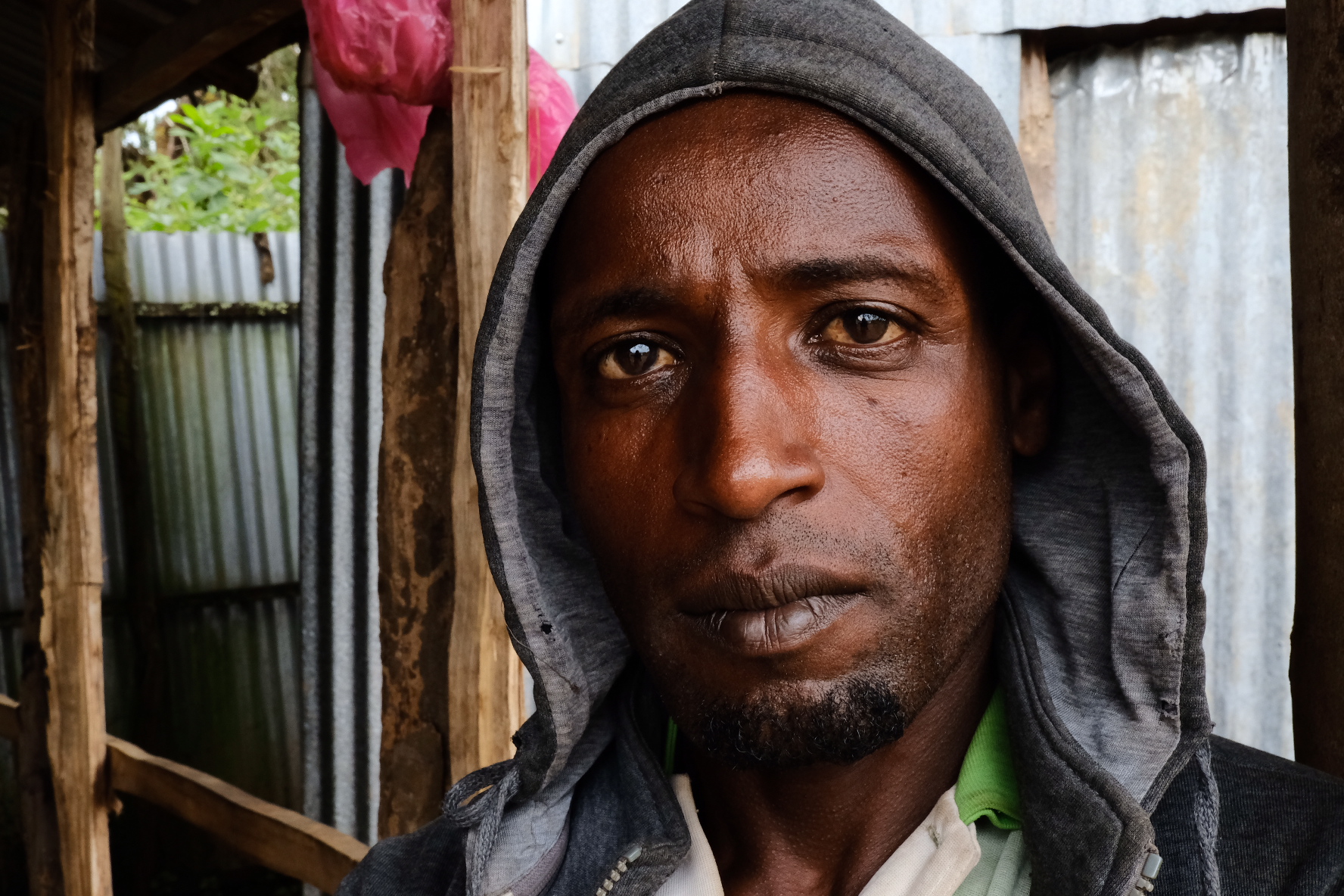 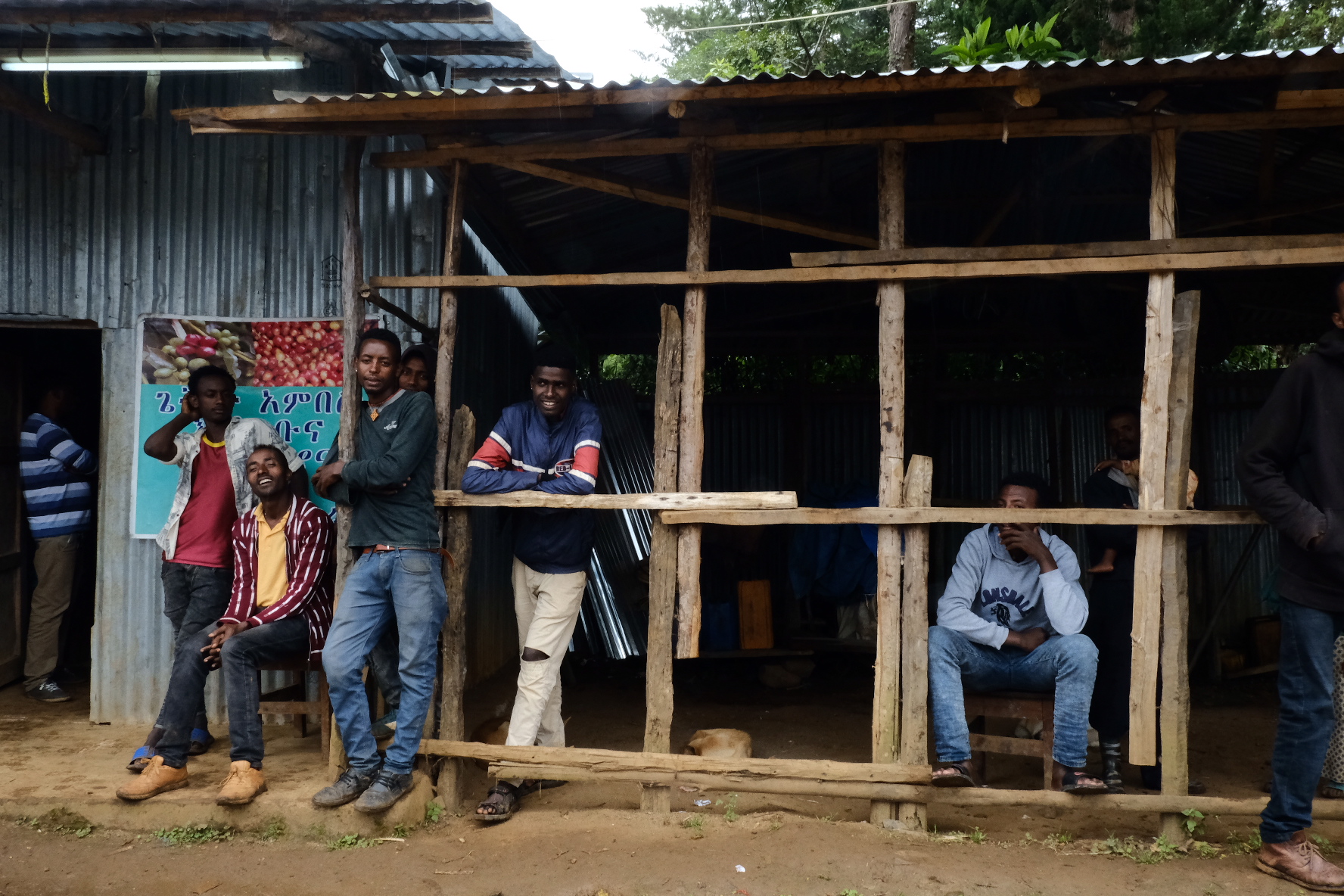 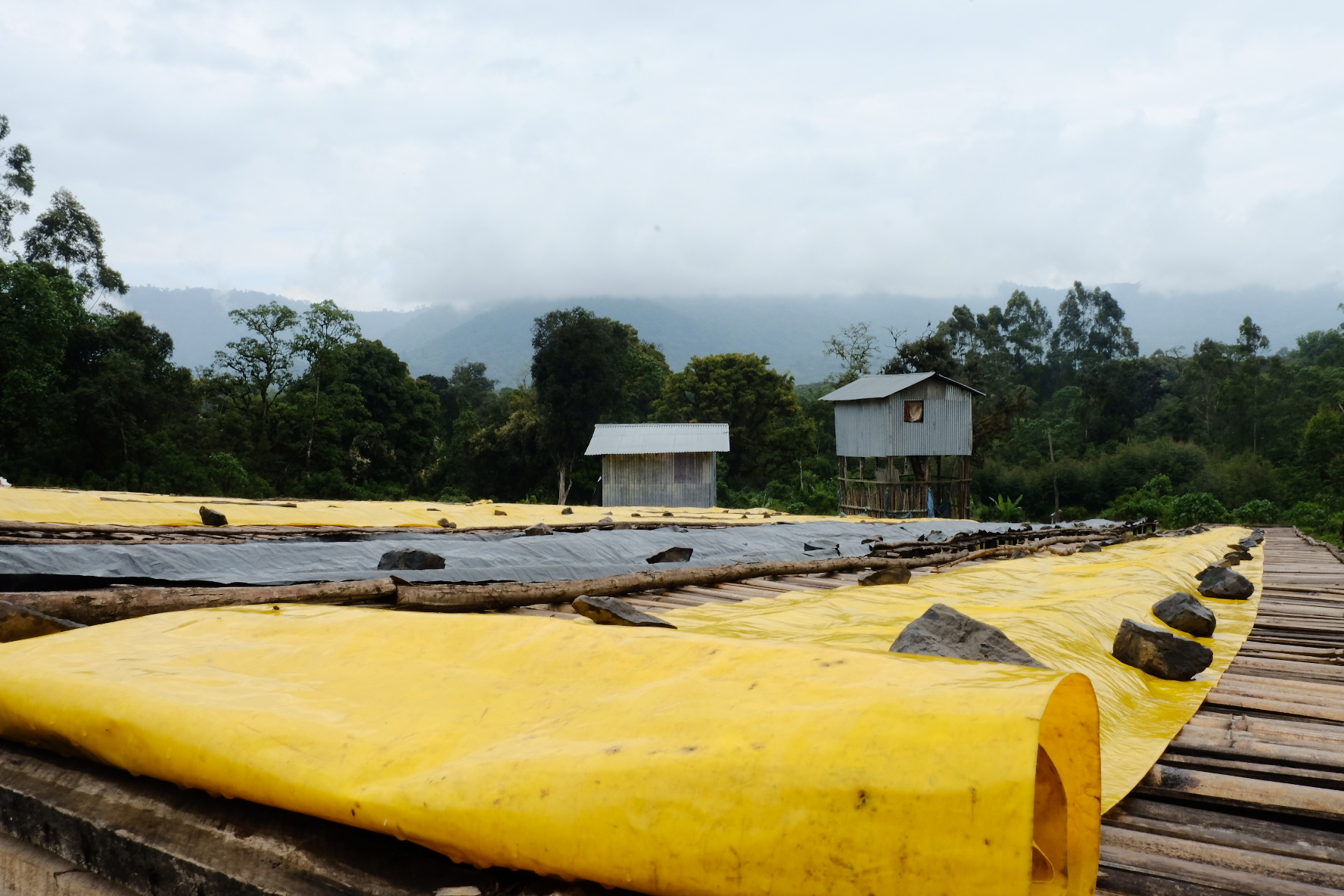 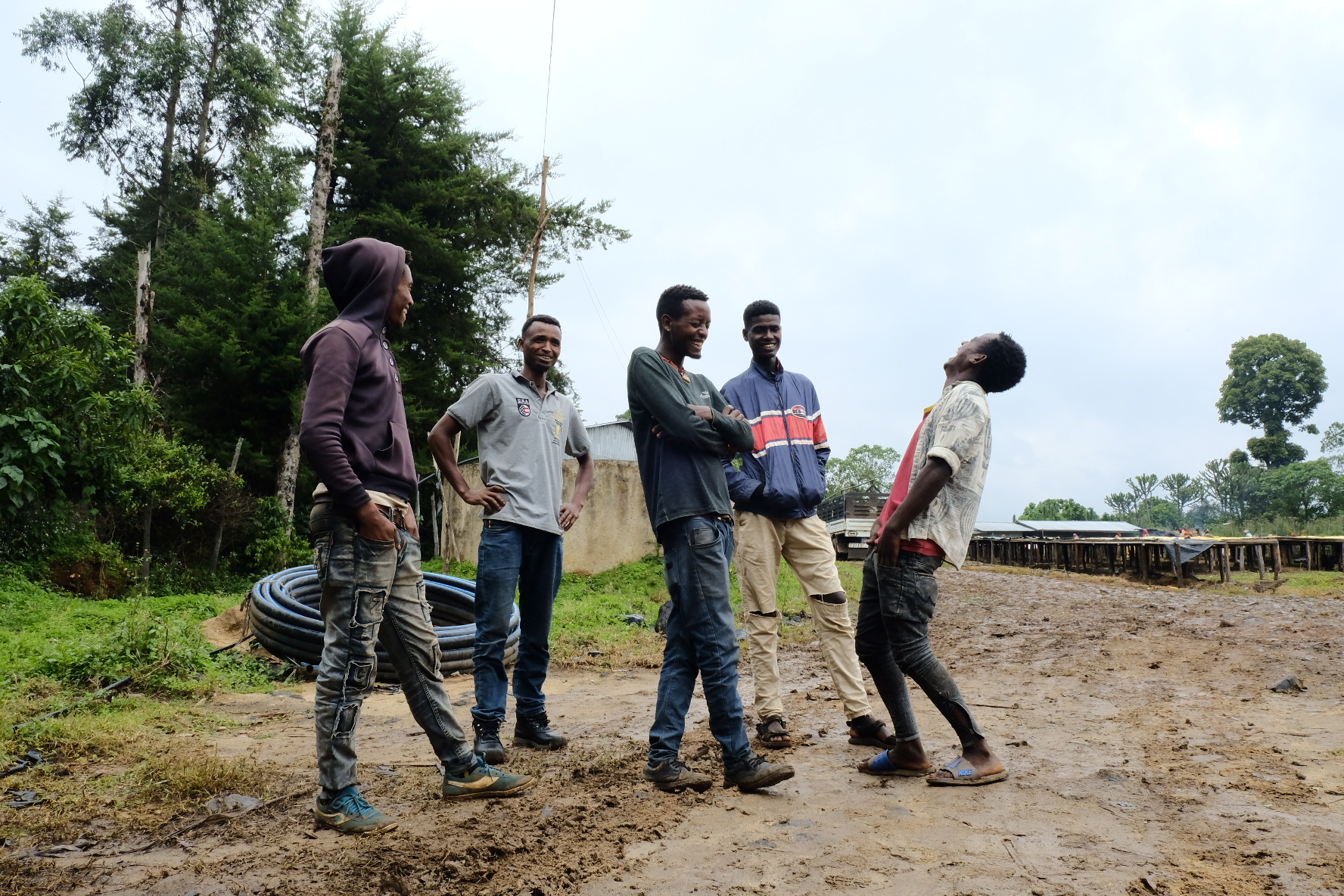 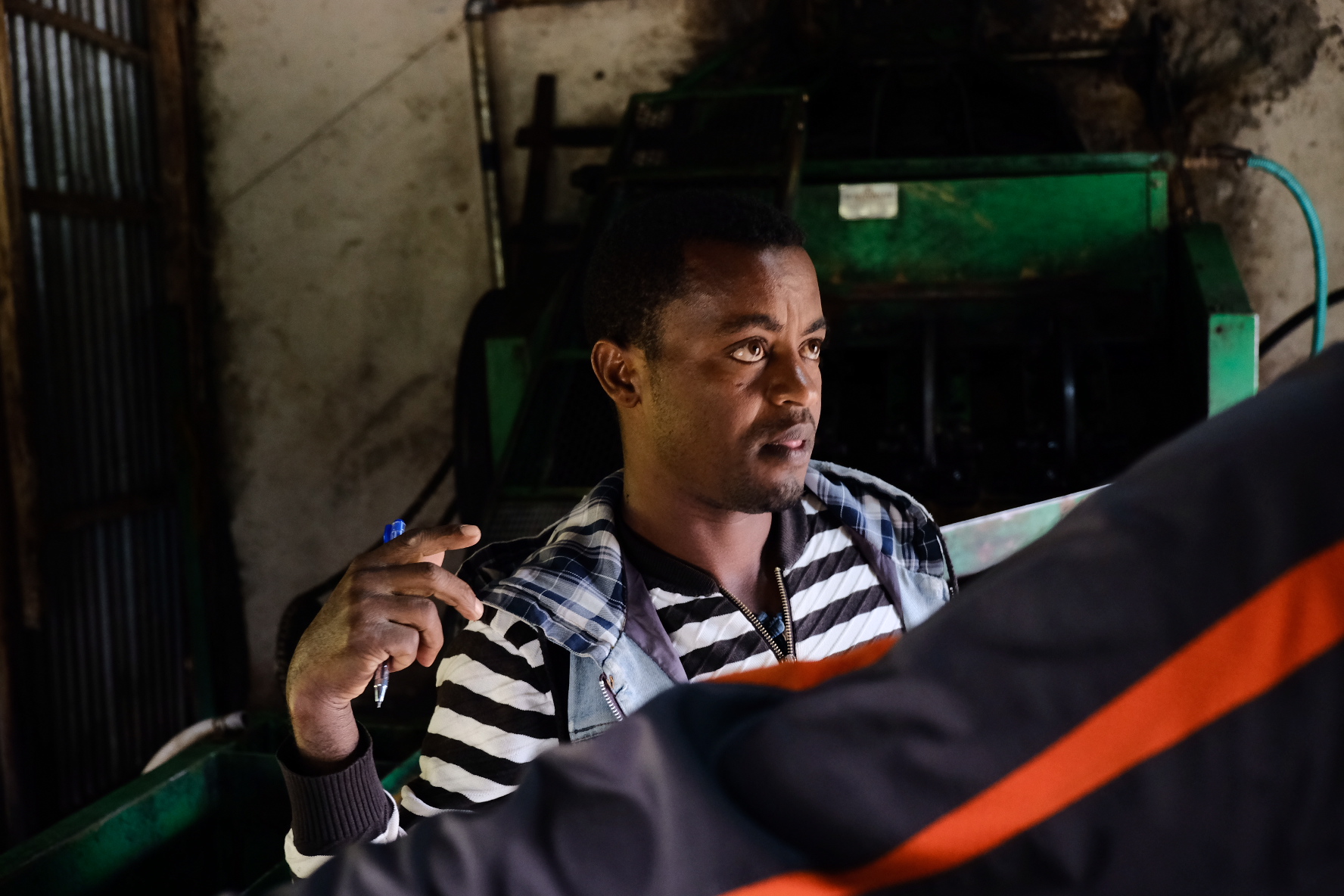 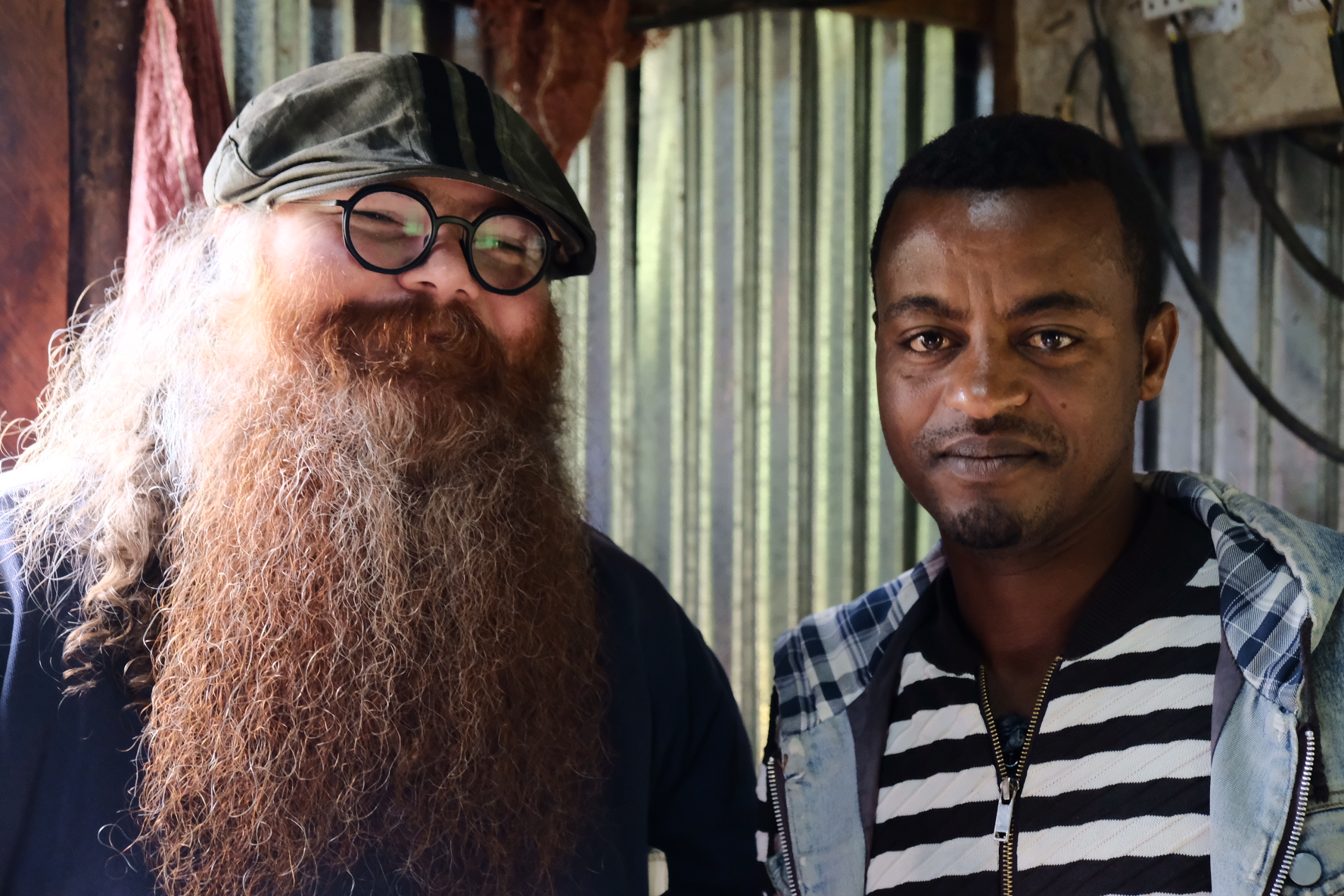 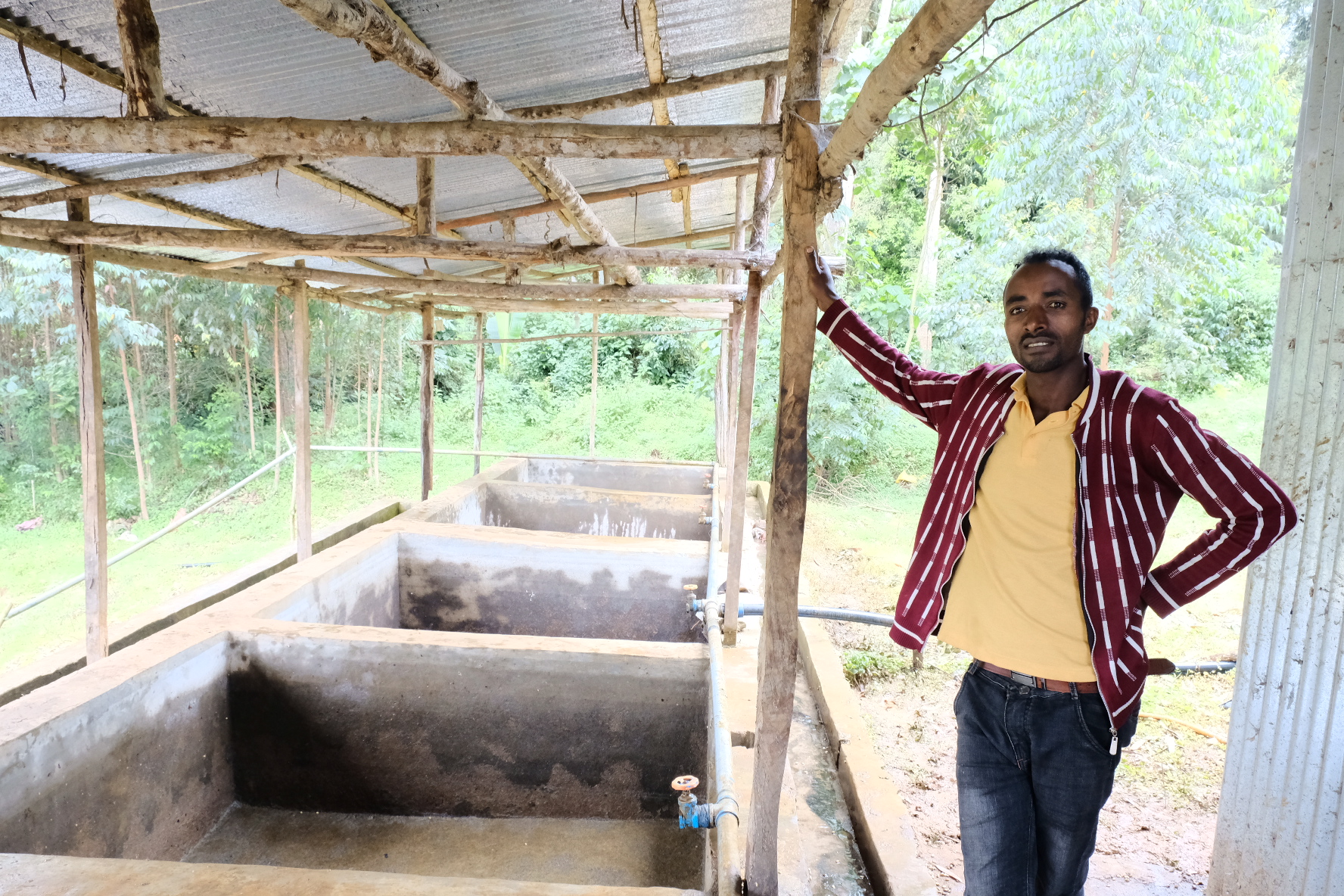 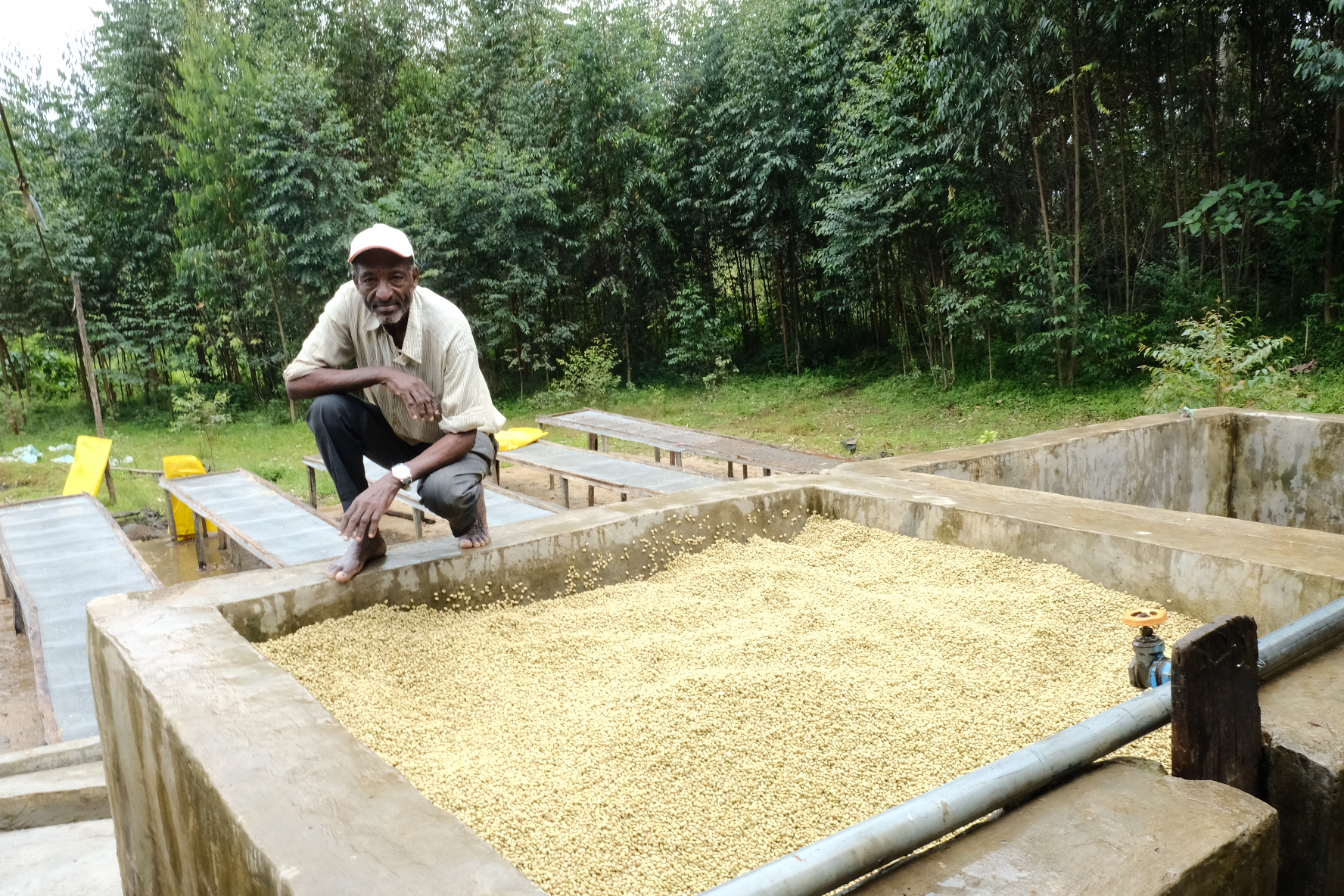 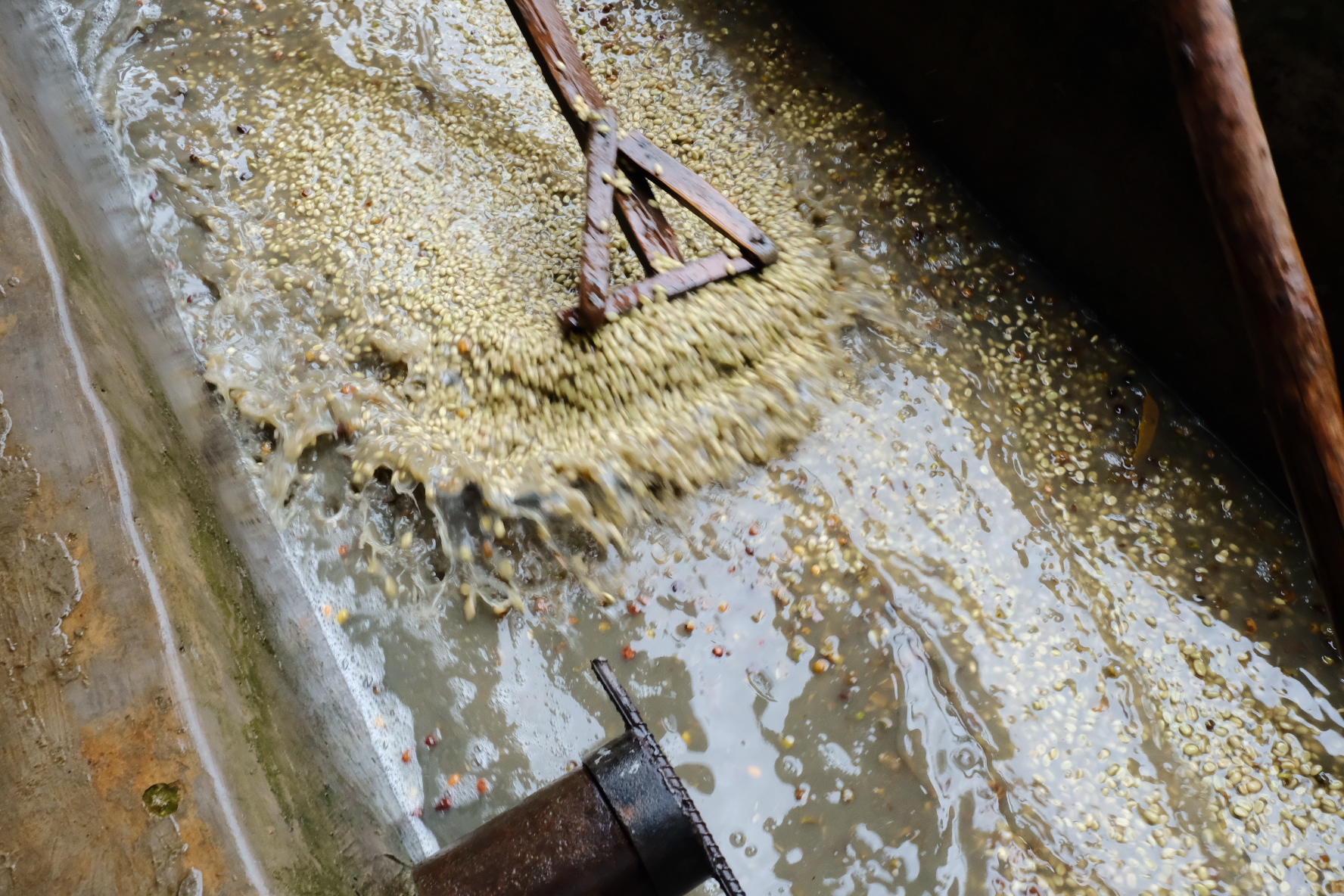 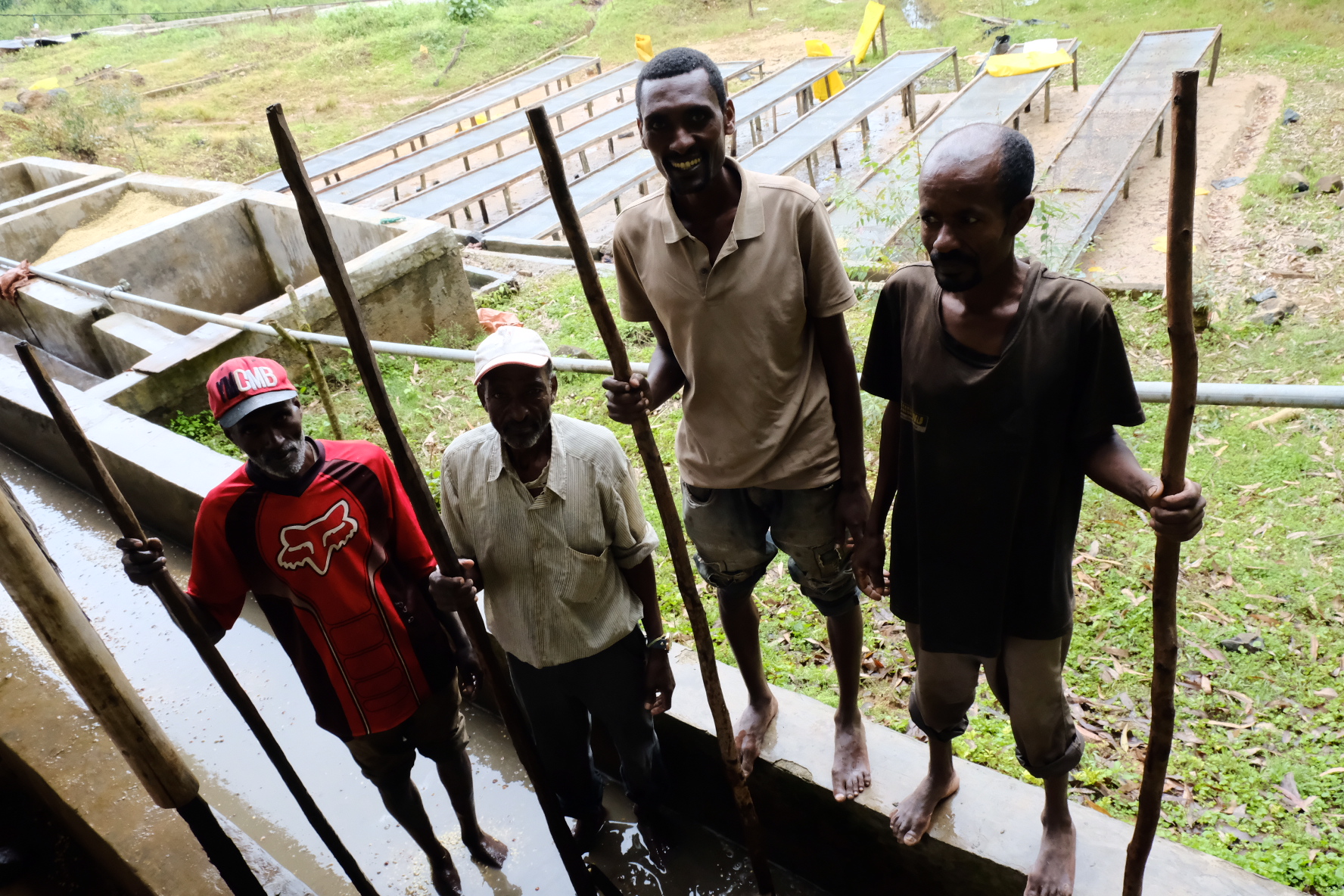 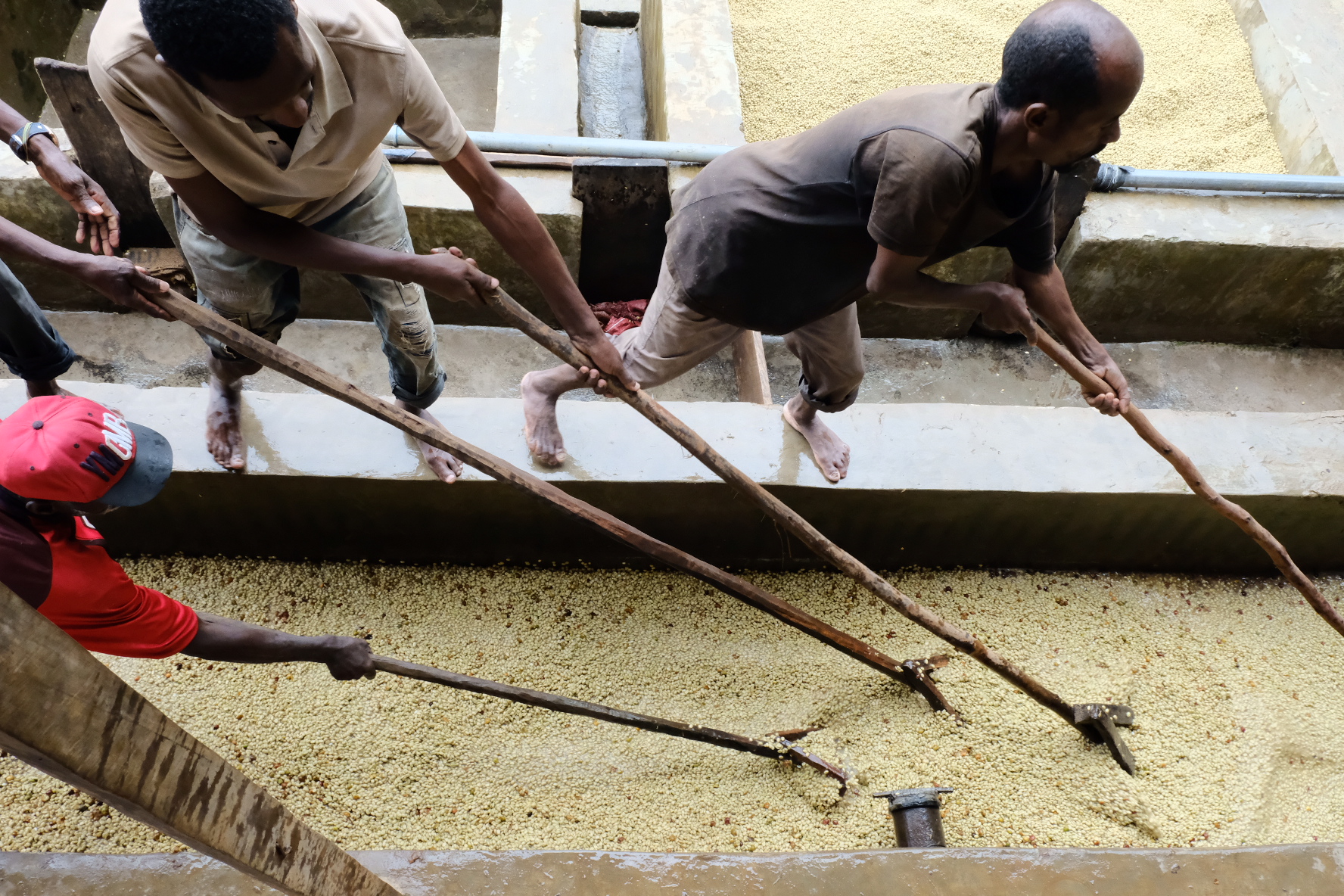 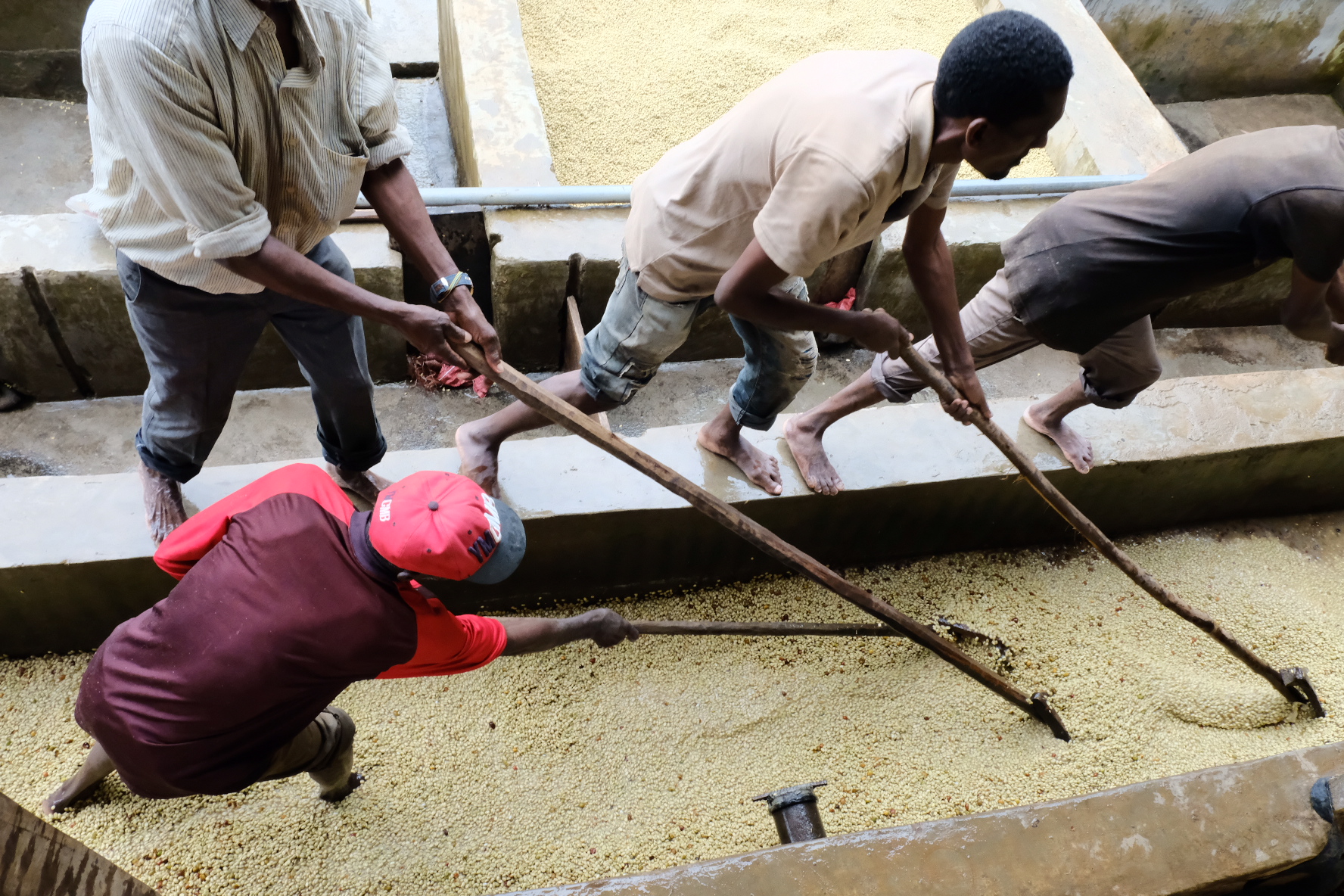 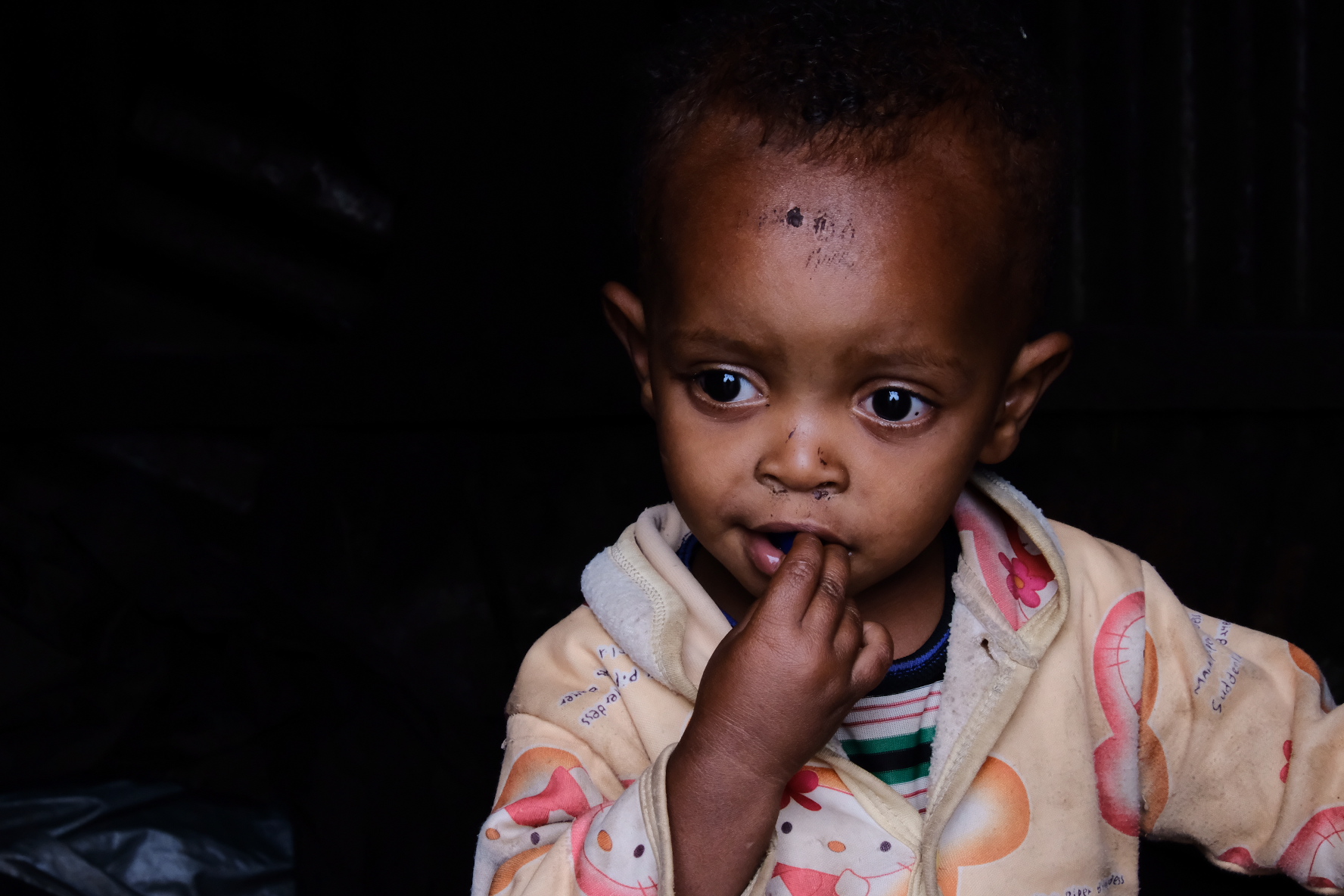 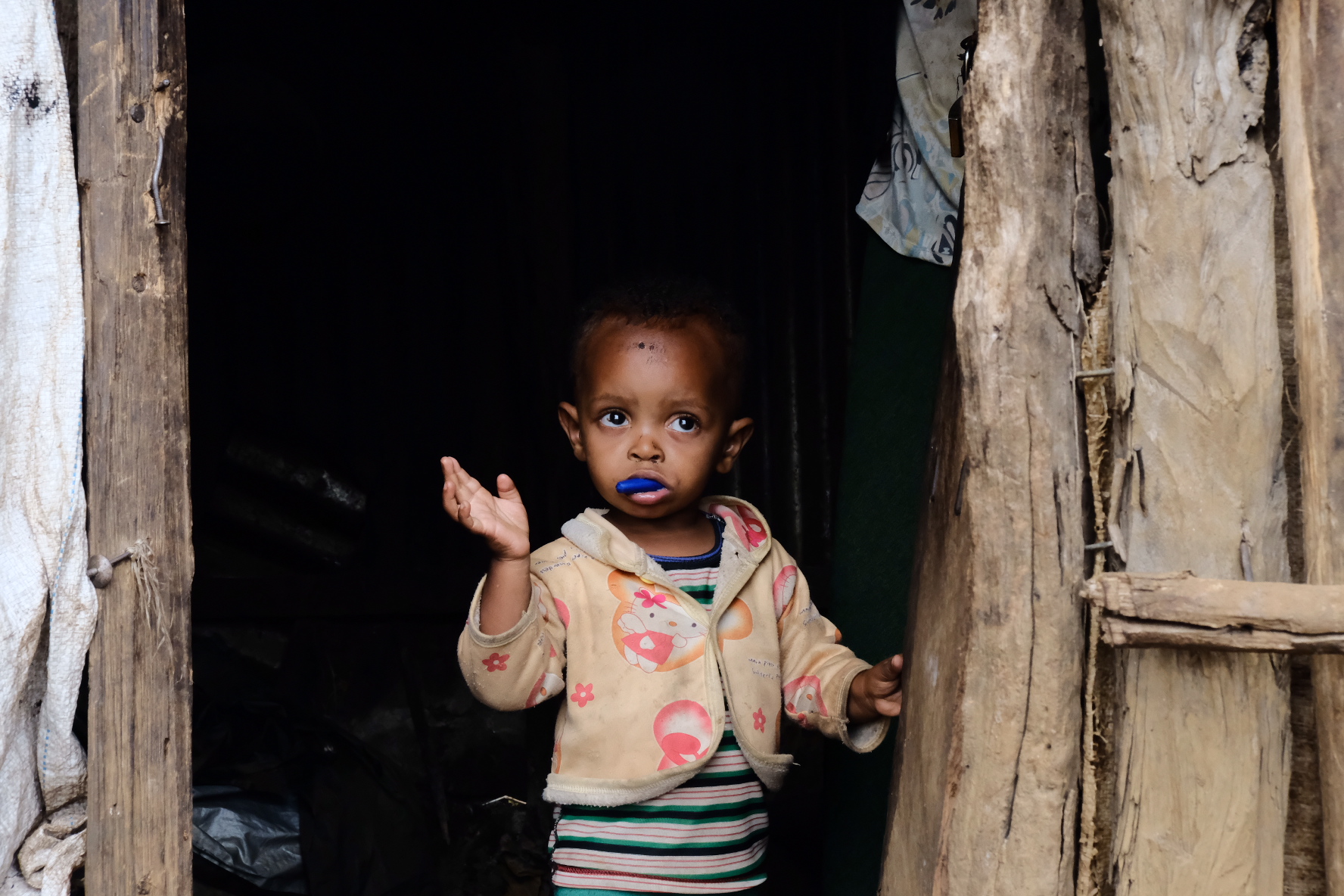 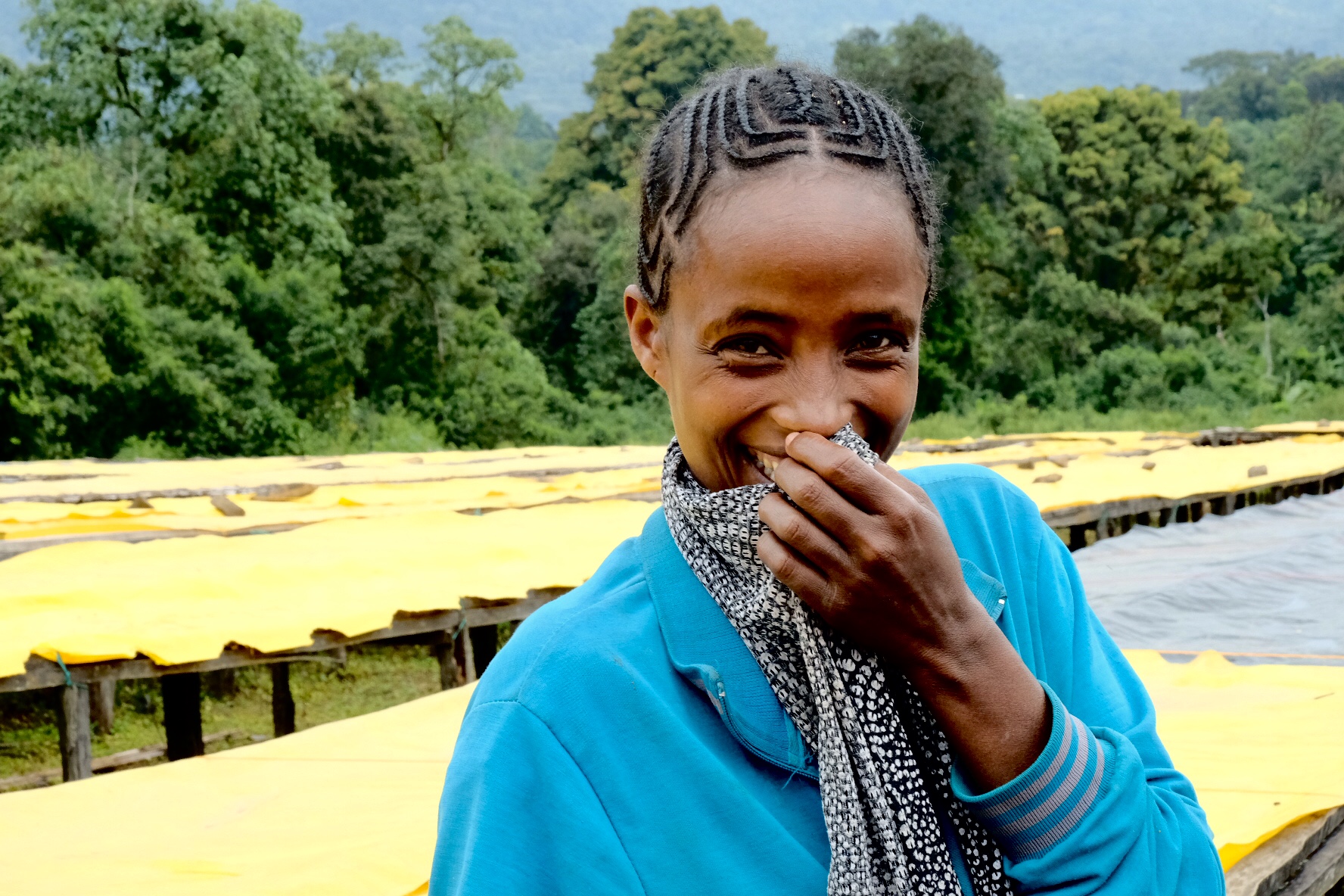 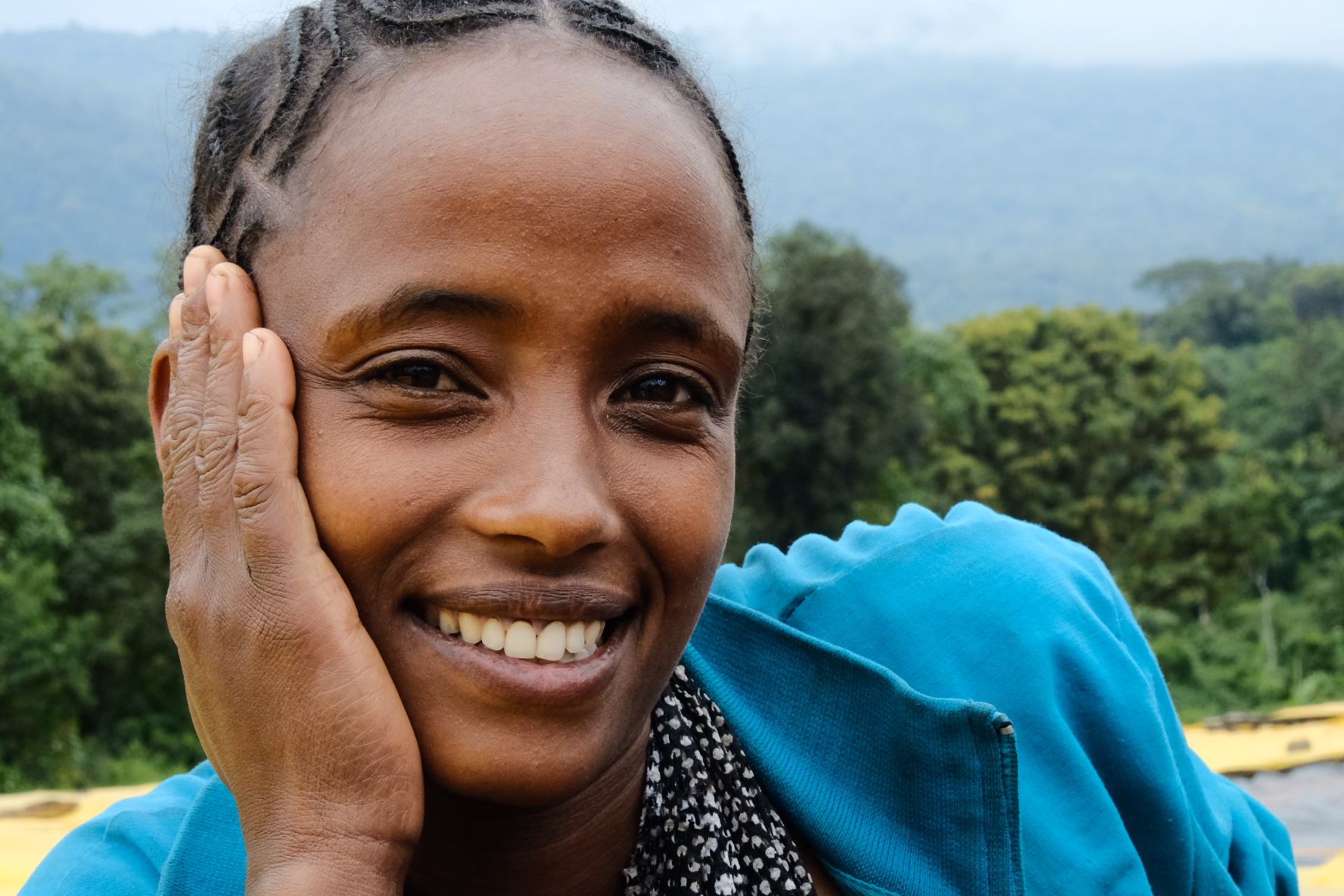 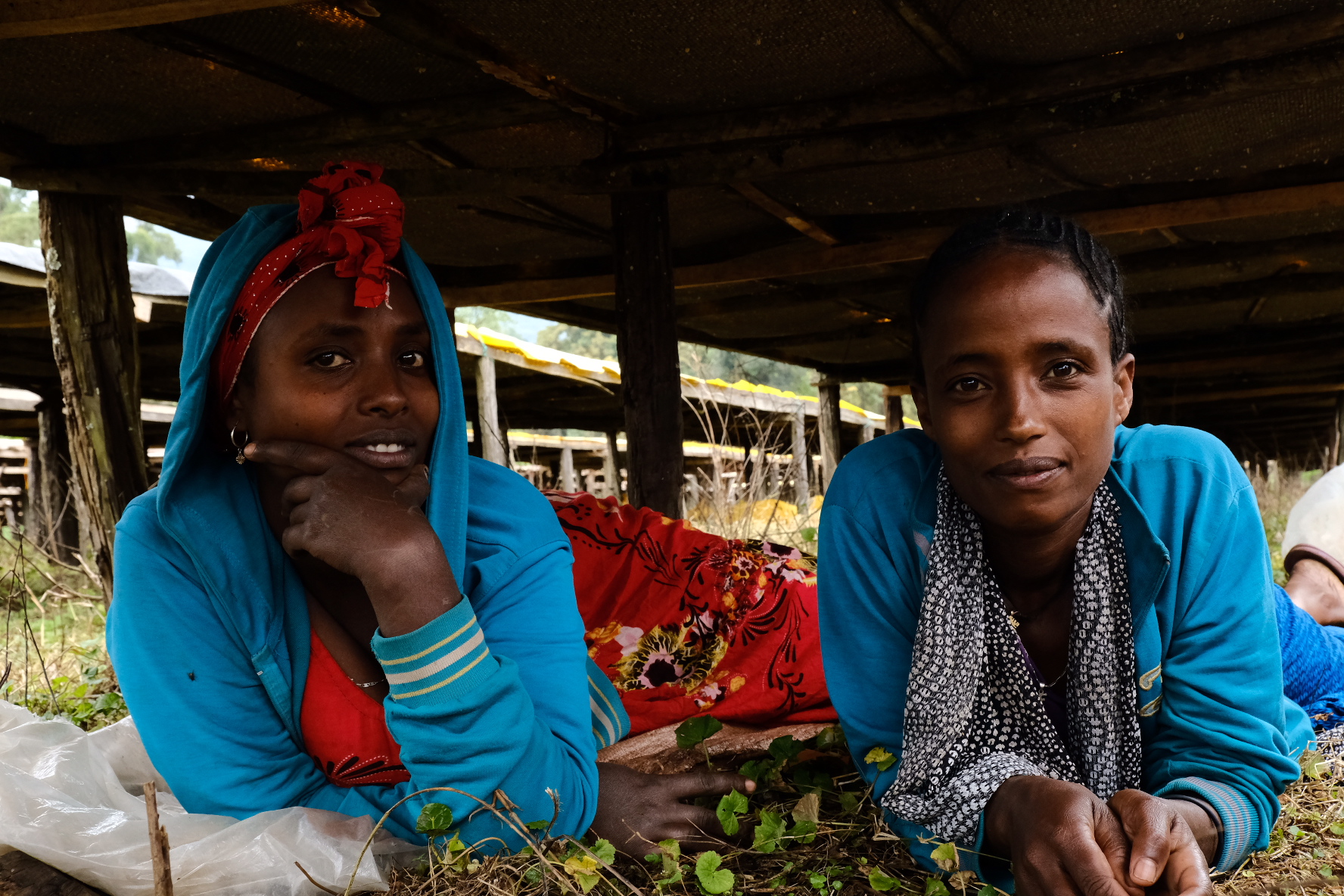 One of the great attributes to Getinet’s operation is his vertical integration between farm and processing station. He personally oversees the entire operation, with skilled managers at both sites. The washing station is five years old and employs 12 permanent workers and upwards of 400 during the busy season. Asmamaw, the manager of the washing station, is very zealous about his job and passionate about processing quality coffee.

Over the washing station hangs a gentle mist, one of the effects of the African rainforest climate. The wet days and wetter nights mean that Asmamaw and his team must give intense attention to watching the weather and responding to its changes, covering coffee on the drying tables the instant rain begins to fall and opening the yellow plastic sheets to expose it to any sun at all. Drying coffee in such wet climates is a challenge!

The permanent employees live on site, and one of the women prepares a noontime meal for all workers while her toddler runs around waving hello to everyone. Permanent workers are paid a weekly salary, versus payment tied to output with day laborers at the farm and washing station.

A high-quality four-disk McKinnon pulper, which is constantly adjusted, ensures the coffee cherries are pulped consistently, and Asmamaw personally ensures the machine is well-scrubbed every day. The mechanic, Kumilachew Tamiru, has over five years of experience and takes enormous pride in the care of the pulping machine and the output.

At Getinet’s washing station there are nine fermentation tanks, seven of which are used for first grade coffees (in this case meaning heaviest density, not associated with Grade 1 cupping quality) and two of which are for lower grade (lower density) lots. The water for fermentation and washing comes from the nearby Wanji River. Normally, coffees are fermented for 48 to 72 hours depending on cloud cover and weather conditions, scrubbed with fresh water one to four times, and then soaked for a day to eliminate any lower-density cherries. At that point, the coffee is moved using mesh frames to the bamboo and mesh drying beds, where it is dried in a few stages. The first stage is for six to eight hours post-soaking, in order to let the excess moisture drip off the parchment, and then the coffee is moved to the mesh beds and dried to 10%-10.5% moisture levels. Following this, the lots are taken to the storehouse where the volume is measured and the parchment coffee is bagged and placed on bamboo pallets for stabilizing before making their way to Addis Ababa for export processing.

Ethiopia is made from many beautiful zones all nestled together. One such zone is Sheka, part of the SNNPR (Southern Nations Nationalities and Peoples Region) and home to the Sheka Forest Biosphere Reserve area (declared in 2012). To reach Getinet’s farm, you must drive through the beautiful Illubabora Forest, part of Sheka Forest, where the valleys hide from the road behind veils of tree leaves. Rainfall turns milky in small puddles in the clay road. Glossy-sided cows and horses graze, making ripping sounds as their teeth tear the lush grass.

The Sheka Forest has a unique ecology that incorporates bamboo, wetlands, forest, and agricultural land. Sheets of small yellow flowers cover hillsides like slabs of sunshine; the air is moist and smells of cow and sun and cooking fires. Honey is traditionally nurtured within the Sheka Forest, which is also a sacred place of worship for many of the local people. Many endemic species of animal and plant life grow wild here. These include several types of monkey including the blue monkey, baboon, African buffalo, lion, and others.

The SNNPR is divided into 13 zones; Sheka is bordered on the south by Bench Maji, on the west by Gambela Region, on the north by Oromia, and on the east by Kaffa (where, it is widely accepted, coffee was discovered by a rambling goatherd many centuries ago). Sheka's capitol is the city of Masha, and the zone is about 772 square miles.

EMILY MCINTYREMARCH 7, 2019
Back to Articles